Official White House portraits are separate from the presidential portraits that hang in the National Portrait Gallery in Washington. 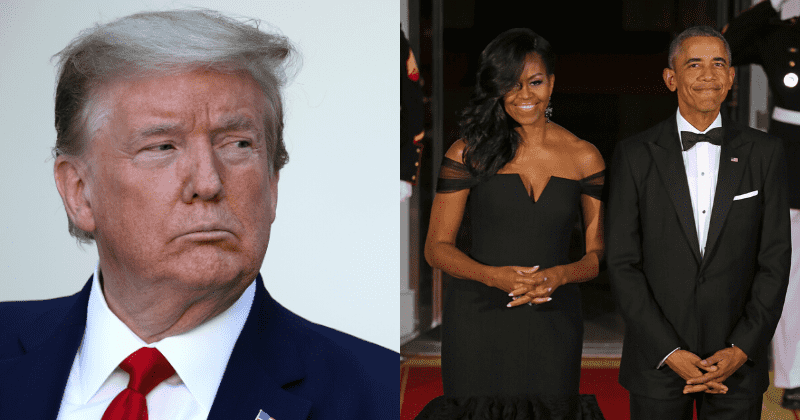 Obama and Michelle already have their portraits hung in the National Portrait Gallery, which was revealed in February 2018. However, the official White House portraits are part of a different tradition altogether and it looks like former President Obama may have to wait till 2025 to have his portrait revealed if Trump wins a second term. The portrait is displayed at the White House alongside every U.S. president before him but Trump is not ready to unveil it. According to NBC News, the White House portrait unveiling may be skipped for this first time in decades because of tensions between Trump and Obama.

"We may have our differences politically," President Barack Obama said when he hosted former President George W. Bush for his portrait unveiling in 2012, "but the presidency transcends those differences." It looks like Trump doesn't agree. Trump recently alleged that Obama is part of a scandal dubbed as "ObamaGate". Trump has claimed that the crime was worse than the Nixon-era Watergate episode. According to The Atlantic, "That wrongdoing somehow includes illegal surveillance, malicious prosecution, coup plotting, and treason, and it invariably involves a lot of superlatives and exclamation points—though precisely what Barack Obama is supposed to have done remains unclear." Asked by a reporter what exactly he was accusing Obama of, Trump mused: “It’s been going on for a very long time … You know what the crime is. The crime is very obvious to everybody.” Many have criticized Trump's allegation as simply being a distraction from the ongoing coronavirus pandemic that has killed many Americans. Others have also slammed the President's handling of the situation.

We already knew that but it's nice to be able to read Susan Rice's email to prove how a professional and ethical WH operates.

Obama too has quietly criticized Trump’s response to the coronavirus pandemic but did not explicitly mention him. “More than anything, this pandemic has fully, finally torn back the curtain on the idea that so many of the folks in charge know what they’re doing,” Obama said during a virtual commencement address for 2020 graduates of historically black colleges and universities. “A lot of them aren’t even pretending to be in charge.” The former president’s comments were widely interpreted as a direct jab at his successor, even though he never mentioned Trump by name. "You've got a president who's talking about putting the previous one in legal jeopardy, to put it nicely. We have not seen a situation like that in history," presidential historian Michael Beschloss said. "It takes antipathy of a new president for a predecessor to a new level." Katie Hill, a spokesperson for Obama, declined to comment. The White House also declined to comment.

Biden will do it.

Official White House portraits are separate from the presidential portraits that hang in the National Portrait Gallery in Washington, where the Obamas' were unveiled in February 2018. As for White House portraits, the work begins near the end of a president's term or soon after, and it takes a few years to complete. Stewart McLaurin president of White House Historical Association said in February 2017 that the organization was in discussions with the Obamas about their portraits. A contract was finalized in early 2017 after the couple selected an artist but the process was stalled. Even if Trump and Obama were willing to take part in a portrait-unveiling ceremony, it’s possible the coronavirus pandemic could place limitations on it. Family members, staff members, and friends of former presidents tend to attend these events. "It's a statement of generosity on [the part of] the current president and first lady," former White House curator Betty Monkman said in an interview with the White House Historical Association in 2017. "And it's a very warm, lovely moment."

Very mature, and another symptom of his utter obsession with his failure to live up to the standards of a wonderful president.

The unveiling has been a White House tradition for decades. The first-term president would host the ceremony in the East Room for the unveiling of the official portrait of his immediate predecessor. The portrait will then hang in the walls of the White House. No matter which party they belonged to -- Republican presidents have done it for Democratic presidents, and vice versa. The first formal East Room unveiling with a president and his immediate predecessor appears to have been in 1978 when Jimmy Carter welcomed Gerald Ford back to the White House. Will Trump be able to do the same? Can he put petty politics aside and be the bigger man?  Maybe time will tell.