trending celebrity people lifestyle news animals
Trump Raped 13-Year-Old Girl, 'Screaming That He Would Do Whatever He Wanted', Stated Lawsuit

Trump Raped 13-Year-Old Girl, 'Screaming That He Would Do Whatever He Wanted', Stated Lawsuit

Donald Trump and Jeffrey Epstein, who was charged with sex trafficking, were sued by a woman who had accused them of raping her when she was 13-years-old. 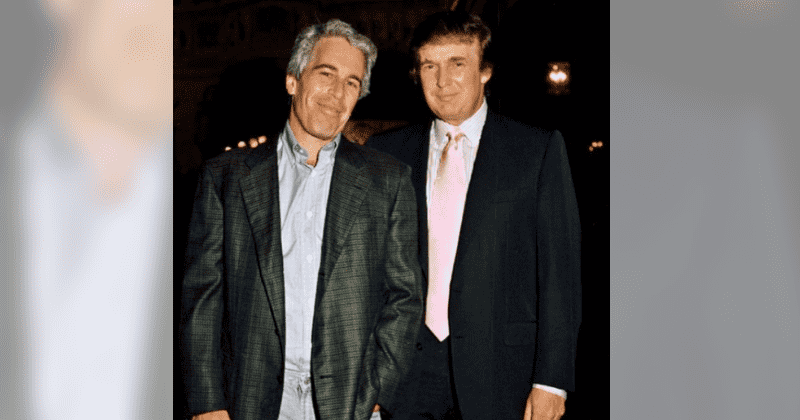 America is headed to elect one of two old white men who have been accused of sexual misconduct. In 2016, 15 women had come forward to say on record that they had been sexually assaulted by Donald Trump. One among them was a woman who filed a suit under a pseudonym against Trump and financier Jeffrey Epstein for rape, sexual misconduct, abuse, and undue emotional duress. The lawsuit stated that the plaintiff who was then a 13-year-old aspiring model was violently raped by Trump in Epstein's residence in the summer of 1994.

Trump & AG Barr locked the case away but justice will be served in this case - make no mistake about it 🦅🇺🇸@realDonaldTrump pic.twitter.com/ENFkWW4ejX

This came to light right before the Presidential elections that Trump went on to win. The man who had even gone on to brag about kissing women without their consent and grabbing their genitals was soon holding the most powerful position in America. Epstein was later charged with sex trafficking and conspiracy in 2019. Although he was due to face trial next year, he killed himself in his cell, reported BBC.

Trump admits to a close friendship with Epstein. He told New York magazine in 2002:

“I’ve known Jeff for fifteen years. Terrific guy...it is even said that he likes beautiful women as much as I do, and many of them are on the younger side.” https://t.co/rmIcMBA3nS pic.twitter.com/HkMElrujgq

The lawsuit contained disturbing details about the type of abuse the teenager had to endure at the hands of powerful men. The young girl "was enticed by promises of money and a modeling career to attend a series of parties," where Trump tried to initiate sexual misconduct with the minor. It was during the fourth encounter that Trump tied the girl to a bed and proceeded to forcibly rape her. The girl loudly pleaded with her assaulter to stop, to no avail. Trump then struck the young girl in the face and then started "screaming that he would do whatever he wanted." She was then raped by Epstein as well. The two threatened the girl that if she revealed their sexual misconduct to anyone, she would be "physically harmed if not killed."

UPDATE: 43 more women have come forward with accusations of sexual misconduct against Donald Trump in a new book https://t.co/mrvbRlnrjw

Here are some of the women who have previously accused Trump of abuse and sexual misconduct pic.twitter.com/FYonvJPGHX

The accuser has also used the pseudonyms "Katie Johnson" was also warned that she should keep mum about what happened to her "if she didn’t want to disappear
like Maria, a 12-year-old female that was forced to be involved in the third incident with Defendant Trump and that Plaintiff had not seen since that third incident, and that he was capable of having her whole family killed," the lawsuit stated. Johnson also accused Epstein of raping her “anally and vaginally despite her loud pleas to stop,” and that he “attempted to strike Plaintiff about the head with his closed fists while he angrily screamed that he, Defendant Epstein, rather than Defendant Trump, should have been the one who took Plaintiff’s virginity.”

"The allegations are not only categorically false, but disgusting at the highest level and clearly framed to solicit media attention or, perhaps, are simply politically motivated," Trump told RadarOnline, after the first lawsuit was filed. "There is absolutely no merit to these allegations. Period." Alan Garten, Trump's attorney had also rubbished the allegations. Speaking to POLITICO he stated "It is categorically untrue. It is completely frivolous. It is baseless. It is irresponsible. I won’t even discuss the merits because it gives it credibility that it doesn’t deserve."

Every woman makes her own own choice about what is best for her. Life’s a journey. Most of us get stronger as we get older. I respect women.

Johnson was set to hold a press conference but backed out at the last minute. "She has been here all day, ready to do it, but unfortunately she is in terrible fear," Lisa Bloom, Johson's attorney stated. Her client had started receiving threatening phone calls on her cell phone shortly after her first complaint was filed. Johnson then dropped the suit even before the hearing began. Jill Harth, another woman who had sued Trump for sexual assault in 1997 also dropped her lawsuit. But sh, still stands by her claims. reported Vox. Additionally, Jessica Leeds, a businesswoman, and Rachel Crooks, who was a receptionist have also accused Trump of behaving inappropriately with them. "He was like an octopus," Leeds told The New York Times. "His hands were everywhere."