Trump pointed that the Florida governor is "a friend of mine" and "a great guy." 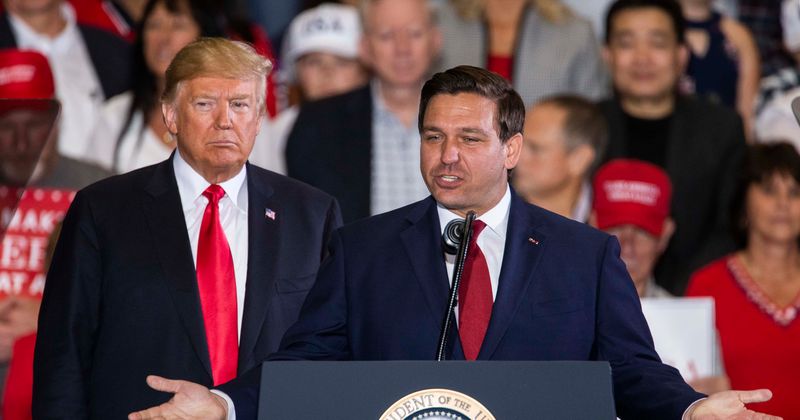 Donald Trump isn't backing down from his election loss in November and is planning on a return to politics in 2024. The 74-year-old told Fox News on Thursday that he is "100 percent" thinking about another presidential bid in 2024, and that he would "certainly" consider making Florida Gov. Ron DeSantis (R) his running mate. During the exclusive interview on Mornings with Maria, Trump spoke of involving the Florida governor in his run for the presidency. DeSantis is "a friend of mine" and "a great guy", he said. "I endorsed Ron and after I endorsed him he took off like a rocket ship," Trump continued. "He’s done a great job as governor." “A lot of people like that — you know, I’m just saying what I read and what you read — they love that ticket,” Trump added. “But certainly, Ron would be considered. He’s a great guy.”

Former President Trump said he would consider tapping Florida Gov. Ron DeSantis as his running mate should he make a comeback presidential bid in 2024 https://t.co/w1bf5k9YHf pic.twitter.com/rBAzNvZ5tM

The former president's comments come the morning after President Biden’s address to a joint session of Congress. President Biden noted that US Vice-President Kamala Harris—the first woman to hold that office—and House of Representatives Speaker Nancy Pelosi sat behind him while he delivered his speech. After addressing Harris in his opening remarks as Madam Vice-President, Biden pointed out, "No president has ever said those words from this podium. And it's about time."

Biden made a particularly important statement, CNN reported. "My fellow Americans, trickle-down, trickle-down economics has never worked." He continued, "Since 1960, our government has spent $5.1 trillion. Our debt has grown by $648 billion. Prices have exploded by 178%. How much better off are we for all that? Well, we all know we're very much worse off. When we measure how harshly these years of inflation, lower productivity, and uncontrolled government growth have affected our lives, we know we must act and act now ..."

Truth! Trickle-down economics (Reaganomics) has never worked. It is exciting to hear a plan to build from the bottom and middle up. The majority of Americans deserve long-promised posterity! The single most important sentence in Joe Biden's big speech https://t.co/uREVSgBYjO

"... We can create the incentives which take advantage of the genius of our economic system -- a system, as Walter Lippmann observed more than 40 years ago, which for the first time in history gave men "a way of producing wealth in which the good fortune of others multiplied their own," declared the president. He added, "Our aim is to increase our national wealth so all will have more, not just redistribute what we already have, which is just a sharing of scarcity. We can begin to reward hard work and risk-taking, by forcing this government to live within its means." "It's time to grow the economy from the bottom and the middle out."

According to a CBS News national poll taken after Biden’s speech, 85% of the speech viewers said they approved of the president’s speech.

What was former President Trump's response to Biden's speech? "He didn’t discuss the border." This was the response from Trump when asked what "struck" him about Biden’s speech on Wednesday night. It looks like the current issue of the economy or the pandemic is not what is of concern but the fact that "tens of thousands of people are pouring into our country" at "a level that has never been seen before." He noted that those "pouring into" the US include criminals and that the Biden administration "is doing absolutely nothing" to stop them. "It’s out of control," Trump said, warning that if the situation continues "it will destroy our country."

President Biden is asked if he believes he'll be running against Donald Trump in 2024:

"Oh, come on. I don't even think about — I have no idea. I have no idea if there will be a Republican Party. Do you?" https://t.co/En0Jq7Xzd0 pic.twitter.com/YAiufcKBMp

Earlier this month, Trump spoke with his daughter-in-law, Lara Trump, on her online news show The Right View, which was previously produced by the Trump 2020 campaign. The interview was taken down from social media platforms as Trump himself has been banned from them. Facebook and Instagram pulled the clip down because it 'featured Trump speaking' and the 'voice of Donald Trump' According to the Daily Mail, Trump made some comments about how "boring" Twitter had become without him. Speaking of his presidential run again in 2024, he said, "You do have hope, that I can tell you, you do have hope. We love our country, this country, we all owe a lot to our country, but now we have to help our country.'"

Donald Trump suggests he will run for US President again in 2024 in TV interview with Lara | Daily Mail Online https://t.co/Pi4VToKuVN