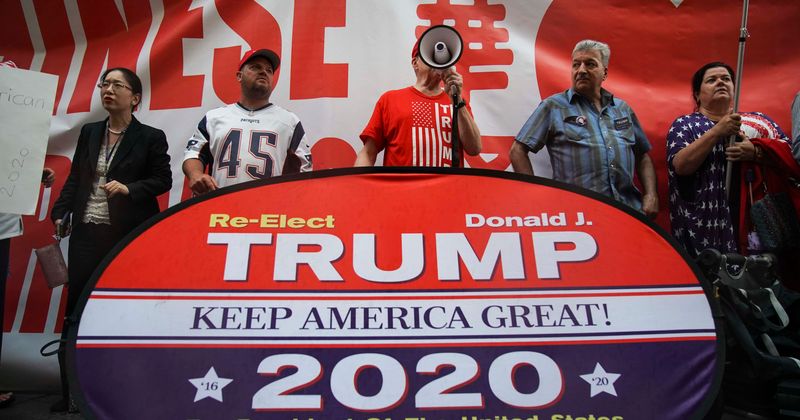 Donald Trump hired background actors and extras for $50 to fill Orlando’s Amway Center, Florida to capacity while launching his 2020 Presidential campaign, according to the Hollywood Reporter. An email sent by Extra Mile Casting, a casting agency shows that it needed people for an “event in support of Donald Trump and an upcoming exciting announcement he will be making at this event” on June 16, 2019, the date of Trump’s Florida rally. The email went on to say that it was looking to “cast people for the event to wear t-shirts and carry signs and help cheer him in support of his announcement.”

The New York-based casting agency sent the email on June 12 and said it “understands this is not a traditional 'background job,' but we believe acting comes in all forms and this is inclusive of that school of thought.” The email goes on to claim that the casting call is for an event called “People for a Stronger America.” It then claims the group is looking to “encourage Trump”, “The entire group is a pro-small business group that is dedicated to encouraging Donald Trump and his latest ventures. This event will be televised.”

.@realDonaldTrump staffer not too pumped i took pic of "homemade" signs (passed out to people before event) in trash pic.twitter.com/zLL2ETBI79

The email stated that actors would be paid $50 dollars for less than three hours of work. The email claimed that it was sending out casting calls in partnership with Gotham Government Relations and Communications, a New York-based political consulting group that is known to have worked with the President before. The consultancy group failed to comment on the issue and also removed any links, on its page, connecting it to Donald Trump.

Donald Trump, who launched his bid for the 2016 Presidential elections from a Trump Tower, wanted to make a statement for his re-election bid and chose Florida, a state that is up for grabs, to make his statement. Florida is one of the crucial states in the Presidential elections as Trump found out in 2016 when he edged Hillary Clinton in 2016 by a margin of 1.2% of the votes. With nearly 500 days to go for the 2020 elections, polls show that Trump is trailing all Democratic Presidential candidates in approval ratings with Biden leading him by 9 points.

The process of hiring people to attend rallies and events is called “astroturfing” in politics and is usually outsourced to political consulting firms like Gotham GR. The practice reflects poorly on the political candidate but it helps the candidate give the appearance of having ground support.

Eric Trump just said there are 100,000 people here in Orlando for Trump’s rally. The 20,000 seat arena is currently not full.

Trump’s campaign manager, Corey Lewandowski, denied claims of having hired actors to fill Orlando’s Amway Center, Florida and said he had never heard of Extra Mile or Gotham GR. “Mr. Trump draws record crowds at almost every venue at which he is a featured speaker, said Lewandowski. “The crowds are large, often record-setting and enthusiastic, often with standing ovations.” Casting agency Extra Mile also denied the claims and said, “We don't know anything about that.”