While strict laws exist regarding the hunting of polar bears, several companies still offer Arctic expeditions for vanity hunts of polar bears and other vulnerable species. 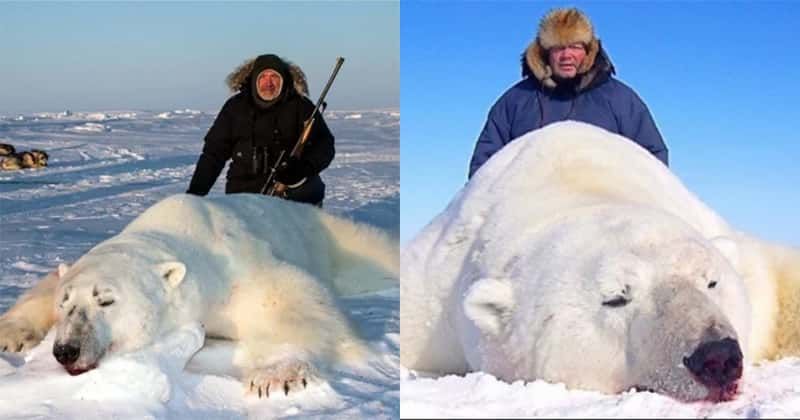 Photos of trophy hunters standing alongside slain polar bears are being used by several hunting firms to advertise expeditions to the Arctic. Reports show that 5,000 polar bears have been slain for sport in ­the Canadian part of the Arctic Circle in recent years. While hunting companies organize several kinds of big game hunts, trips to the Arctic Circle are considered "the most memorable" by trophy hunters. One Nebraska-based company, Worldwide Trophy Adventures, even offers hunters a second 10-day hunt during prime hunting season "in the event that a polar bear is not taken during the scheduled 10-day hunt".

According to the company's website, the hunting package provides the services of an "experienced Inuit polar bear guide with a dog team throughout the duration of the hunt" as well as "field preparation of the trophy". The hunt ends when a "polar bear is harvested". According to the World Wildlife Fund, there are between 20,000 and 25,000 polar bears left in the wild, and the species is classified as vulnerable. The species is found in the Arctic across Canada, Alaska, Greenland, Denmark, Norway, and Russia. In 2008, the U.S banned the import of polar bear trophies into the country. Norway is currently the only country that has banned all hunting of polar bears, whereas Russia, Alaska, and Greenland allow indigenous communities to hunt the bears in set numbers for food and clothing. However, according to The Mirror, Canadian Inuit are selling the licences for trophy hunting.

Another hunt organizer, Ameri-Cana Expeditions, promises "high success rates and good trophy quality". Their website boasts that they've been offering polar bear hunts for over 30 years and says, "hunting is still an important part of the lifestyle of the mostly Inuit population. Quota systems allow the villagers to supply many of their needs from populations of seals, walruses, narwhal and beluga whales, polar bears and musk oxen." This company also offers the services of a taxidermist, saying, "Your Polar Bear hide, skull, and baculum bone will be shipped frozen from Grise Fiord to a recommended Canadian Taxidermist to be fleshed and cleaned properly. Once properly prepared, your hide can be stored for many years." The price posted for an American to kill a polar bear during a 12-day expedition is listed as $1043.83 ($1,375.50 Canadian) in addition to the price of the hunt - just over $44,000.

Eduardo Gonçalves, of The Mirror's Campaign to Ban Trophy Hunting, said, “It is well known polar bears are in serious danger of becoming extinct because of climate change. If we want to see them survive, we need to stop the senseless slaughter." He added, "How can anyone justify having a polar bear body in their home as a trophy or for so-called ‘personal use’? As well as dwindling food resources because of shrinking sea ice, polar bears face threats from oil and gas drilling, toxic waste pollution, new diseases as a result of global warming, and busier shipping lanes. The last thing they need is for trophy hunters to go around shooting them for fun just so they can pose for a selfie and have a bear’s head over their fireplace."