"To call me out, and then take off your skirt and be rockin’ a g-string—either she’s a hypocrite or it wasn’t about what I was wearing," the tourist said. 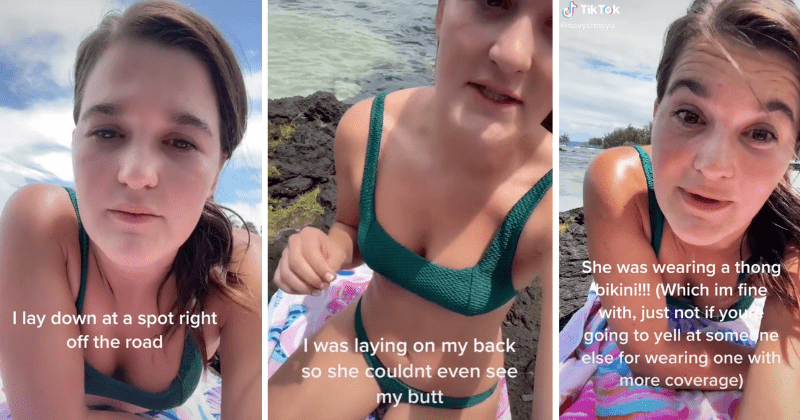 Some people really strut around thinking they own the world. One entitled woman reportedly told a beach-goer in Hawaii to leave, and the reason she gave was that the bikini the tourist wore was inappropriate and "in the way" of her kids. According to New York Post, Savannah Sims claims she was sunbathing in a green bikini on Hawaii’s Big Island when the woman, with her boyfriend and children, approached her to complain about her outfit. Recalling the "worst experience in Hawaii," Sims said “The mom starts saying to her boyfriend, ‘No I can’t have that,’ and ‘That’s not OK with me.’”

Woman told to 'leave the beach' after fuming mum complains about her bikini #Savannah Sims said she was sunbathing on a beach in Hawaii when a family joined her nearby, and the mum quickly took offence https://t.co/ferLHJjMoj https://t.co/kGDzpTkkKk

“I look up and she’s looking at me, so I ask if there’s an issue. She said she doesn’t want to see my butt and lady parts.” Sims says the woman then demanded Sims leave the beach. “She wanted me to leave. I was in her way,” Sims says. “So I got up and left. … It ruined my day.” But, here's where it gets unreasonable. In the video that has been viewed over a million times since it was first shared on April 10, the woman who asked Sims to leave the beach was also in a bikini! “(It’s) totally fine, I wear those all the time. But to call me out, and then take off your skirt and be rockin’ a g-string—either she’s a hypocrite or it wasn’t about what I was wearing,” Sims revealed in a “part 2” video.

She even fit in a shot of her video, asking fellow TikTokers if her bikini was actually at fault. “To be clear, this is my bathing suit—pretty friggin’ normal right?” she says, holding the camera up to show her bikini. Several people commented that she was definitely not at fault. If anything, the woman was probably insecure about her boyfriend, which is why she wanted the probable threat to leave. “Not your fault her boyfriend has (wandering) eyes,” one said.  “Sounds like she’s insecure. That’s her problem not yours don’t sweat it,” another assured Sims. Others took issue with Sims abiding by the woman’s demand and noted what they would’ve done if they were in Sims’ place.

“I would’ve stayed…. And twerked,” one said.  “You should of never left!! Nothing is wrong with what you have on,” another said. The video also pointed fingers at the negative impact tourism has on native Hawaiians. “Maybe she is a local and tired of (tourists). But they need to be nice,” one pointed out. “Ik tourists can be a lot when you live in Hawaii, but keep in mind that the world isn’t yours, it’s to be shared,” Sims’ own caption reads. Meanwhile, a third local added, “We really just don’t like tourist [sic] but this is just wrong. As a local I am sorry because the local girls do the exact same.”

Do Hawaiians really hate tourists? Here's one local's answer on Quora: "We are frustrated by the tourists who disregard warnings or hop fences and cross private property only to get stranded on mountains in bathing suits and slippers (flip-flops) and require helicopter rescues, tourists who drive ten miles an hour slower than the speed limit. backing up and blocking the roads for those who need to get to work and tourists who won’t clean their trash up at the beach. We are saddened by the many tourists who fail to respect the ocean and drown in terrible and mostly avoidable accidents." He also said, "By and large, residents here will welcome tourists who will follow the rules, pay the taxes, and try to leave no trace."