The video appeared to have been shot in a beach in Namibia and allegedly featured tourists from China. 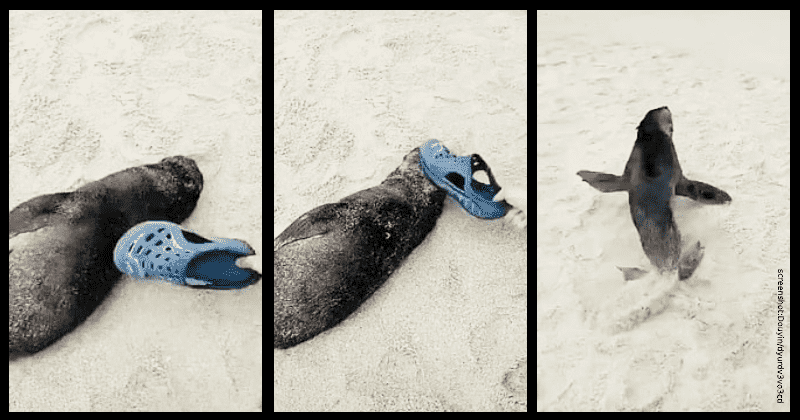 Trigger warning: Animal cruelty; This article contains visuals and descriptions that some may find to be distressing

A heartbreaking video shows a cruel tourist repeatedly beating a baby seal that was relaxing on the beach. The seal was sleeping on the shore of a beach when the tourist walks up and starts beating the seal with the intention of waking it up. The video shows the baby seal being beaten with a slipper. The voices in the video suggest there was more than one tourist, with the others laughing and egging on the one wielding the slipper. "Your mum is calling you to wake up!" a woman can be heard saying while laughing in the background, reported The Daily Mail.

The man wielding the slipper can be seen yelling, "wake up, wake up" over and over again as he smacks the baby seal using the slipper. The man appeared to be speaking in a Chinese dialect. The baby seals wake up with a jolt after being smacked multiple times. The baby seal is startled to see so many humans standing in close proximity and attacking the seal. The seal fearing for its life escapes as fast as it can. The original video was posted on Douyin, the Chinese version of TikTok. The location where the video was shot still remains unclear but some accounts claimed the incident happened in Namibia.

The China Cetacean Alliance, international animal protection and conservation organization, came across the video and condemned the incident. The organization slammed the tourists for hurting animals for the sake of social media traction. "Not to mention the hidden dangers and the risk of contracting wildlife diseases, doing something so stupidly and evil-y to gain traffic online really discredits Chinese tourists as a group," wrote China Cetacean Alliance. "We hope that all [social media] platforms can help guide the public atmosphere of respecting nature and science. Please stop promoting these sensational accounts that damage the country's image!" added China Cetacean Alliance. The video was then also shared on Chinese social media website Weibo and racked up more than 5 million views. However, a majority of the reactions and comments were against the video, slamming the tourists for their cruelty. There were more videos of the same bunch of tourists attacking other seals but the videos were quickly deleted following the outrage.

Animal cruelty is no longer just unacceptable. It is now illegal.

With the President’s signature moments ago of the #PACTAct, animal abuse is finally a federal crime in the US.

Such acts of cruelty could be deemed a federal offense after Congress signed a bill on the matter last November. The Protect Animal Cruelty and Torture (PACT) Act classifies "the worst and most malicious acts of animal cruelty, including crushing, burning, drowning, suffocating and impaling" as federal crimes. Trump said the new law was an important step towards fighting “heinous and sadistic acts of cruelty,” according to a report by The New York Times. Perpetrators of violence could be fined and jailed up to seven years under the new law.

BREAKING: The president has just signed the PACT Act into law! 🎉

We now have a federal anti-cruelty statute that will allow us to crack down on some of the worst and most malicious acts of animal cruelty.

This is a historic day for animals, thanks to YOU!🐾 pic.twitter.com/S1x7u8AhxW

— The Humane Society of the United States (@HumaneSociety) November 25, 2019

The new bipartisan law sought to fill in the gaps of earlier legislation, including the 2010 law that ruled the production of videos depicting the crushing or torturing of animals illegal. Thanks to the new law, federal agencies, including the FBI, will be able to arrest and prosecute those who torture and kill animals. “The torture of innocent animals is abhorrent and should be punished to the fullest extent of the law. Signing this bill into law is a significant milestone for pet owners and animal lovers across the country,” said Vern Buchanan, a Republican who championed the bill in the House of Representatives, according to a report by The Washington Post. “Our officers investigate thousands of animal cruelty cases each year but have been unable to truly bring justice for the animals in instances when the cruelty occurs across multiple jurisdictions,” said Chris Schindler, who investigates animal abuse.