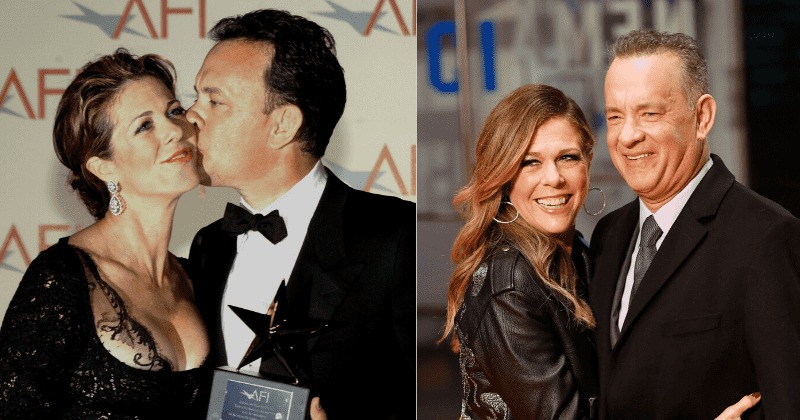 Rita Wilson and Tom Hanks are celebrating 32 years of togetherness! 63-year-old Wilson shared a sweet photo of the couple smiling together. She captioned the photo on Instagram, writing: 32 years with this guy! @tomhanks Happy Anniversary, my love. Let’s go 32 more and then some! The two tied the knot on April 30, 1988. Tom Hanks previously told GQ according to PEOPLE that he felt an immediate spark when he and Wilson worked together on the set of 1985's Volunteers. "Rita and I just looked at each other and — kaboing — that was that," Hanks revealed. "I asked Rita if it was the real thing for her, and it just couldn't be denied."

Tom Hanks was previously married to college sweetheart Samantha Lewes. They have two kids: Colin, 42, and daughter Elizabeth Ann, 37. Wilson and Hanks share sons Chet, 29, and Truman, 24. So what caught Wilson's eye when it came to Hanks? Earlier this month, she told Kelly Clarkson on her daytime talk show that the Oscar winner's loquacious characteristic was "one of the things, when we met, that we just got along instantly." "First of all, I love a good storyteller," she said. "So anybody who could tell a good story, I’m down with that. ... I love that. He makes me laugh all the time. He’s a great storyteller."

In April 1988, Hanks and Wilson tied the knot. "The success of our relationship was a matter of timing, maturity and our willingness to have an intimate connection," he told Oprah Winfrey. "When I married Rita, I thought, 'This is going to require some change on my part.' I won't deny that providence was part of us finding each other, but our relationship isn't magic — the way it's shown in movies. In real life, our connection is as concrete as me sitting here. Not that marriage doesn't come close to being hell in a handbasket sometimes. But we both know that no matter what, we'll be with each other — and we'll get through it."

And they proved that just that recently when life threw a curveball and the couple caught COVID-19 and had to self isolate in Australia. But the two persevered. At the time, Hanks wrote on social media: Rita and I are down here in Australia. We felt a bit tired, like we had colds, and some body aches. Rita had some chills that came and went. Slight fevers too. To play things right, as is needed in the world right now, we were tested for the Coronavirus, and were found to be positive. Well, now. What to do next? The Medical Officials have protocols that must be followed. We Hanks’ will be tested, observed, and isolated for as long as public health and safety requires. Not much more to it than a one-day-at-a-time approach, no? Thankfully, the couple was given the green signal to back home to America once they got better and have been quarantining there together since.

"I think that having the virus at the same time made it that little bit easier," Wilson told The Guardian. "We were taking care of each other instead of having the pressure of taking care of one person and no one taking care of you or understanding that the person at home needs a break." Through the past nearly four decades the couple have truly proved to stand by each other no matter what, in sickness and in good health. In 2015, Wilson revealed that she had undergone a double mastectomy and reconstruction after being diagnosed with breast cancer. "You never know how your spouse is going to react in a situation like this," Wilson told the New York Times, as per PEOPLE. "I was so amazed, so blown away by the care my husband gave me ... who knew it would make you even closer?" She revealed in an Instagram post that in the event she did not survive the disease, she had some choice words for her Oscar-winning husband. She wrote: Four years ago when I was diagnosed with breast cancer, I had so many different thoughts. You're scared, anxious, you think about your own mortality. She used the difficult time to inspire her to making new music. She continued: So I had a serious discussion with my husband that if anything happens, I wanted him to be super sad for a very long time and I'd also like a party, a celebration. Out of that story, I wrote ‘Throw Me a Party' with @lizrose0606 and @kristianbush —3 DAYS until my new album #halfwaytohome is released

Please, pass the tissues: golden couple Tom Hanks and Rita Wilson speak about how they beat cancer together https://t.co/MjAYQ2XpRT pic.twitter.com/tMUQ3cmuSJ

"They say it must be hard work. No it’s not. Every now and again you know, you gotta get over some stuff but life is one damn thing after another and it's actually more pleasant to be able to go home with someone you like to spend time with in order to get with it," Hanks once said. He also said that Wilson is Hanks' "best friend,". "In addition to being my lover. And it has been that way from the very beginning," he added. "We laugh just as much now at two in the morning as we always have. And we fight less and less." "I'll never forget, we were standing on the corner of 57th and 5th in New York, or 58th and 5th," Wilson told Piers Morgan of her husband. "We were holding hands, and we were waiting for the traffic light to change. And he looked at me and he said, 'You know, I just want you to know, that you never have to change anything about who you are in order to be with me. Literally, a wave of — if love is a feeling, or a cellular thing that happens to your body — it went through me, and that's pretty much who he is, and how he's been."

According to The Sun, Hank's oldest son struggled with drug abuse but soon worked to get his career on track, landing recurring roles in Shameless and Empire. He became a father in April 2016 and he credits his daughter Michaiah – with partner Tiffany Miles – for keeping him clean. Chet grew up with his brother Truman, 24. Chet has two older siblings, actor Colin, 42, and celebrated writer Elizabeth, 37, from Tom's first marriage. According to The Rolling Stone, Chet and Colin Hanks released statements in response to Hanks and Wilson testing positive for Coronavirus and thanked fans for their support during the difficult time.