Woman Shows How To Clean A Toaster By Removing "Hidden Tray," & People Are Stunned 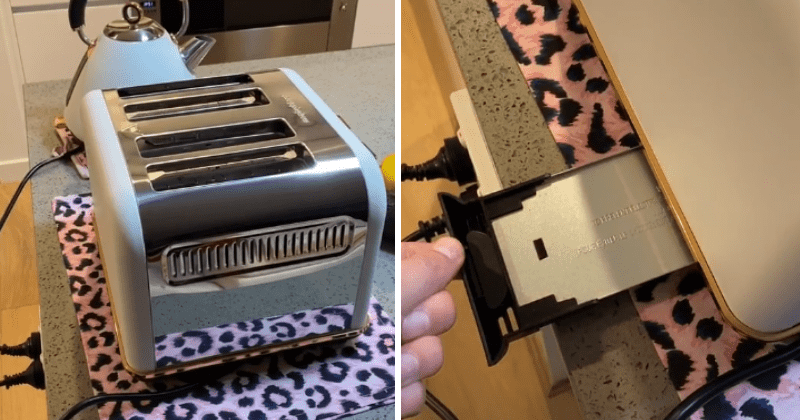 While TikTok is mostly known for its dances and lip-syncs, the video-sharing social networking services has also become an unlikely source for useful hacks. One such user is a professional cleaner from Melbourne known as @thebigcleanco on the platform. In one TikTok video, Kacie shared a video showing how she typically cleans a toaster. She said, "There are cleaning hacks going around the internet that are not really cleaning hacks at all... they make it harder," she explained. "I'm a professional cleaner and this week, I was sent [a hack] saying 'clean your toaster with a hairdryer'." In another video she asks, when was the last time anyone cleaned out their toaster. According to the Daily Mail, she revealed a "secret" tray compartment that not many people were aware of. More than the cleaning technique, people seem baffled that the appliance had a hidden tray beneath the toaster. Is your mind blown, already? In her cleaning video, she used a cloth to clean the outside of the gadget before she removed the crumb tray, as it is known by some. The tray is located at the base of the toaster to empty the dried pieces of toast into a bin. The video went viral garnering 2.2 million views.

Wait... People have only just found this out???? How can you not know toasters have a removable tray??!!https://t.co/rNq3CNXkhy

For those who actually want to clean out their toasters ( some people have admitted to never have done it before!), she suggested the best way to clean it was to simply empty the crumb tray and turning the toaster upside down. Just gently tap it over a bin; you can use a cloth to wipe the surface. Make sure to unplug your toaster and use a clean, dry toothbrush to remove the tough crumbs inside the gadget. Some users joked: Today I learned that you have to clean your toaster. One user wrote: Yes there is a tray. It can pop out or slide out depending on the toaster. Clean the trays y'all or violently shake it over the trash bin. Users on Twitter too were gobsmacked. TFennerz joked: It took me 26 years of existence on this Earth to learn that toasters have a little tray on the bottom that you can pull out to empty the crumbs. There was me shaking an upside down toaster over a bin like a fucking idiot. laurenn_grahamm shared: EH WHY DID I NOT KNOW a toaster has a tray you can pull out so you can clean the crumbs ? kennn___ also said in awe: Just seen a video that every toaster has a tray that catches all the crumbs???? Obv went and checked and I am mind blown

Toaster maintenence is a task that should be taken very seriously, I applaud your commitment to your toaster friend.

What? And I have been shaking it upside down all these years? bwhaha

I find the crumbs collect everywhere BUT the crumb tray tbh

While many people often dismiss TikTok videos for being too "cringey," it does appear that people are also "learning" from them. Previously, we reported that one video has been hailed as "revolutionary" where TikTok user 'Brittnaenae' shared a 10-second clip on the platform on how to fill ice cube trays the "right way." In the video, she poured water onto flat spots on the tray that separate the grooves instead of directly pouring water into the ice cube holes. This allows the water to trickle gently into the four surrounding sections without splashing or overflowing. "Am I just dumb? Or did nobody else know this either? These little flat spots on ice cube trays are where you're supposed to fill the water," she shared in the video.

Don't know about anyone else, but I'm beyond shocked.

While we've learned some cool hacks, we've also found really strange information on there as well. Remember the time we told you about a weird bump on the roof of your mouth?  When you slide your tongue on the roof of your mouth right now, does it feel smooth or is there a bump? If you feel a hard bump, then you're part of a small percentage of the population who has one. This "bump" is called torus palatinus. Interesting, right? The platform has also been used to share powerful messages, too!  A Black teen named Cameron Welch took to TikTok to share the rules his mom makes him follow as a young black man in the country. To avoid being harassed by the police, the 18-year-old listed out how to stay safe before leaving home with a list of rules that many Americans take for granted. So if you've been dissing TikTok videos as frivolous entertainment, it's probably time to think again.

It's time for change. We need to tear down the whole system and build a new one.