User @myabeatrize revealed on the video-sharing platform that she and her boyfriend were driving at night when the incident happened. 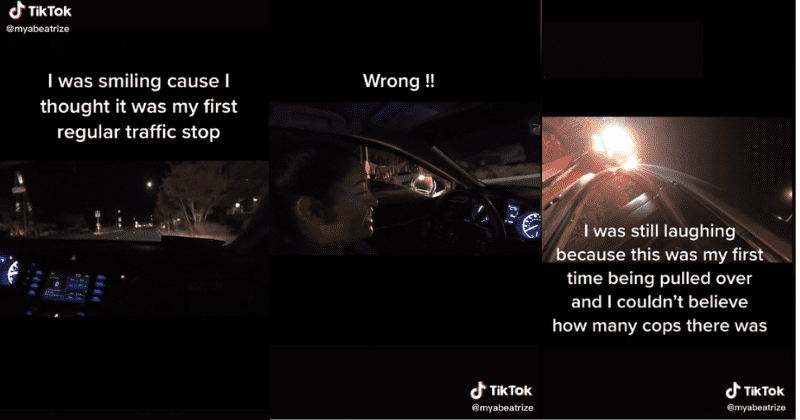 When a TikToker and her boyfriend were pulled over, they thought it was a routine traffic stop but they were far from the truth. Eight police cars and a helicopter had surrounded their vehicle because they believed the couple was in possession of a firearm but they couldn't have been further from the truth either. User @myabeatrize revealed on the video-sharing platform that she and her boyfriend were driving at night when the incident happened. Having been pulled over, she was asked to throw the keys outside and she complied. At first, the TikToker was all smiles thinking it was her first traffic stop but things grew tense when cops asked her to put her hands outside her window.

"Put your hands out the window?" asked her puzzled boyfriend. "What the fuck did I do?" asked an equally bewildered @myabeatrize. The next thing they knew, there were multiple cars surrounding them and flashing lights and sirens. "Remain in there until we give you further instructions," announced one officer through a bullhorn. "There’s a whole ass helicopter, do you hear that?" continued her partner. "Oh no, there’s so many cops! This is my first time getting pulled over," shared the woman who was completely shocked by the situation. According to Daily Dot, the TikToker noted that she and her boyfriend complied with the officers' instructions.

My first time being pulled over, I was wrongfully accused

Meanwhile, officers could be heard planning how to best surround the car in the background. "You got that side? We got her side," a cop is heard saying off-camera. @myabeatrize shared the whole encounter in a four-part TikTok video series. She began by explaining how she was driving around their own neighborhood with a GoPro when a neighbor apparently saw them and called the police. Cops were informed that somebody was waving a gun around but it was the boyfriend filming using a GoPro that they mistook for a gun. When police saw the car, which matched the neighbor's description, they immediately pulled it over. The TikTok user believes that she and her (Black) boyfriend were racially profiled.

"Whoever called the police on me, saying that I was the one waving a gun around or he was the one waving a gun around, I immediately assumed [it was] someone who was racial profiling," she explained in a follow-up video. "Black man, waving around something Black, that you don’t know what it is so 'oh my God, it’s a gun.'" The couple was no doubt harassed for no fault of their own as @myabeatrize even revealed that several police officers pointed their guns at them. They even brought out a K-( officer to sniff around the car and searched her car.

The original clip was reportedly viewed over 13 million times, with many expressing their sympathy for the couple who found themselves in the unfortunate situation. However, there were many who were left furious. "SUE FOR TRAUMA. IT’S POSSIBLE!!!" wrote one. Another added, "I would have sued EXPEDITIOUSLY." Thankfully they weren't injured in the process, unlike a pregnant woman whose car was flipped over by a police officer as she did not pull over fast enough. Nicole Harper, 38, was two-month pregnant when she got into a crash on U.S. Highway 167 in Jacksonville, Arkansas, we previously reported.

A cop flipped over a pregnant woman's car because she didn't pull over quick enough.

Not only is what she did not wrong, it's what you're supposed to do: turning on hazards to indicate you're complying and pulling over at the next safe place to do so...

This man is still a cop. pic.twitter.com/kvNEeEmdf6

The incident happened when Harper was traveling 84 mph in a 70 mph zone which prompted trooper Rodney Dunn to flash his lights and try to pull Harper over. Harper then had turned on her hazards, slowed down, and began searching for a safe place to park. But because the shoulders on the stretch of southbound U.S. 167 were narrow she wanted to pull over safely at an exit. Before she could do that the Dunn drew alongside Harper and executed a PIT maneuver or Precision Immobilization Technique where the trooper tapped the back of Harper's car following a 2-minute pursuit. The trooper's action "constituted a reckless attempt to engage in conduct that created substantial risk of physical injury," Harper's civil complaint said.