Guy Shows The 'Correct' Way To Strain Pasta, Says We've Been Doing It All Wrong

The viral video has now divided the internet. 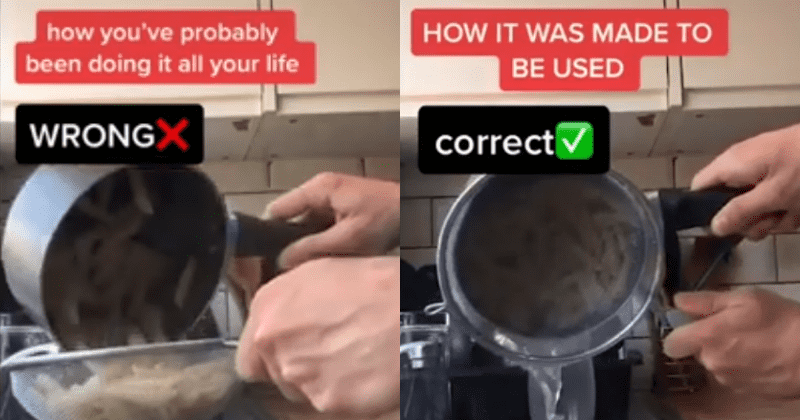 People have been making pasta for the longest time, and in spite of the millions of tries, just about everyone has been straining it wrong. At least, that's what this TikTok user claims. And so, he took to the platform to enlighten us, once and for all, the best and the only way to strain pasta. We've got to say, some people are realizing the error of their ways. To begin the demonstration, the man who goes by the username real_ensee, simply pours a pot of pasta into a sieve to drain the water. He then tells users that sieves were designed to work differently and then goes on to demonstrate the "correct" way he claims "it was made to be used".

Instead of holding the sieve under the pan like most of us usually do, he flips it around to place the domed end of the sieve inside the pot and overturns the vessel. The result? The water drips out while the pasta remains safely inside, and not a single one spills out onto the sink. That's not all. He then points out that the method "makes life easier" as it puts way less strain on the wrists. Titled "Tell the truth, you didn't know about this", the video has gained over 615,000 views and 11,000 likes in a short span of time, according to Mirror.

Users commenting under the video thoroughly loved the demonstration and heaped praises on the OP for teaching them a new life hack. As per Mirror, one commenter was baffled at how they hadn't tried this: "I'm so gonna be doing this now, why have I never thought about this before." Another user wrote: "I think you just changed my life." And rightfully so. Yet another showed surprise at how they'd been using the incorrect method and said: "Wow. Been doing it wrong forever." This wasn't to say that everyone agreed with the original poster though as several people pointed out that the original technique is actually correct and that the method he demonstrated would only work if the sieve is exactly the diameter of the pot, without which the pasta would easily slip out of the vessel and fall right into the sink.

A user wrote: "That's actually not how it's meant to be used. The original way is correct." Another user said: "No, you actually are supposed to pour it in the strainer but you do you." As per Dailymail, a user straight out insulted the OP telling him to "learn how to cook" pasta. The user wrote: "Before teaching others how to strain pasta with the wrong tool you might wanna learn how to cook the pasta." Long story short, the video became a ground for a major debate with people both agreeing and disagreeing with the poster even as various people came away smarter, learning a new technique to strain pasta.

Since its launch in 2016, TikTok has been home to hundreds of thousands of similar trends that seem to teach new life skills and hacks for people across the world. Due to the platform's short video format, and the fact that the majority of the videos are under a minute, regular consumption of viral content has become a major trend online, so much that the social media site has over 500 million users across all continents.