Unbeknownst to you, the wire-bristle cleaning brush is actually putting your family in harm's way 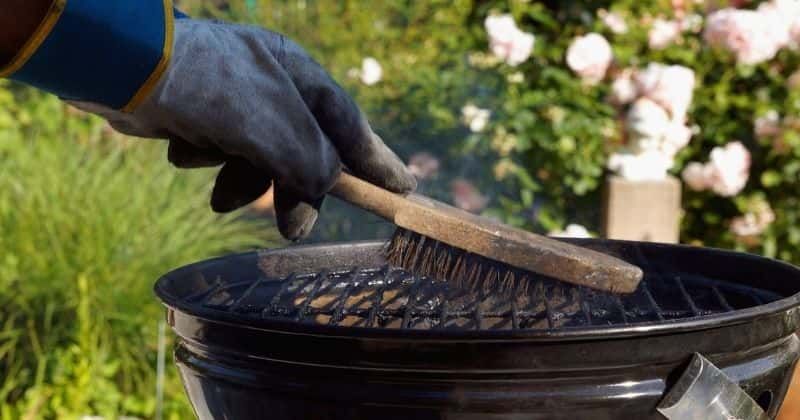 Barbecuing is one of the hallmarks of modern American culture. There's nothing like enjoying a good barbecue in the summer with your friends and family, but there are some simple mistakes that people make that could endanger someone's life. According to ABC News, thousands of Americans each year get injured while barbecuing in their backyard. After a good barbecue, like with all things, the grill needs to be cleaned and well-maintained. People are also aware of flare-ups, which is caused by grease or fat build-up. However, many houses end up using a wire-bristle barbecue brush to do it, and it turns out that this cleaning device is actually putting your family in harm's way.

"What was most striking about this collection is that we saw so many cases at just one hospital," said Dr. David Grand, the lead author of a report on the subject, and a diagnostic radiologist at Rhode Island Hospital. "I started getting calls from around the country from doctors who had seen similar injuries in their patients." Mike Kempster, executive vice president, and chief marketing officer for Weber Grills added, "We are aware that grill brushes can be a safety issue. But when I hear reports like this, my first question is always, how old is the grill brush?"

Throw away ALL your wire bristle cooking/bbq tools guys. Just not worth the risk. pic.twitter.com/mS1B5F333F

A six-year-old boy had to be rushed to the hospital after a loose bristle from the brush got stuck on his grilled hamburger and was lodged in his throat. The story made headlines and people started to raise awareness about the dangers of using wire-bristle grill brushes.  According to a 2016 study, nearly 1,700 injuries from bristle BBQ brushes were reported in U.S. emergency rooms since 2002. Now, it has become a growing health concern. They found out that the reason why this happens is that the metal bristles on the brush slowly become loose after being vigorously used several times. Once that happens, it's easy for a loose bristle to get stuck on the grill. Then, when the raw meat is placed on it, the thin bristle gets stuck to the food which a person swallows unsuspectingly.

Do you own a wire barbeque brush? Woman has surgery after BBQ bristle gets lodged in throat. #news #ctvnews #ICYMI https://t.co/ZXmBle5nwp pic.twitter.com/uoSGFe0dGy

"We knew something was wrong, and he was in extreme pain because he was crying," the boy's mother, Nadia, said. "From the time we had dinner to the time we had surgery, it was about 12 hours later, because our journey started at the local hospital, and then we were transported to Sick Kids," she said. "Actually, the risks from what you are cooking on the grill likely outweigh the brush bristles," said Dr. Joel Levine, a professor of gastroenterology at the University of Connecticut. "High amounts of grilled meats have been long known as a cancer risk." Duff Dixon, vice-president of development at Barbecue World, a retail chain that sells barbecues and their accessories admitted that: "These stories have been happening as long as the brushes have been around."

POLL: Do you use a wire bristle BBQ brush? Vote now at: https://t.co/XFIFkFzmcc pic.twitter.com/4PEHFF82mX

As for safety measures, there are a number of things you can do to guard your food against getting covered by these thin bristles. The first thing you can do is inspect the brush before you use it. If you see loose or worn down bristles, don't take a chance! If you have just purchased a new one, it's time to take better care of it. Make sure you don't leave your brush outdoors because it will wear down faster. After scrubbing the grill, wipe it with a damp cloth to get rid of any loose bristles. Another great way to avoid these wire-bristle brush problems is to use a wooden scraper to clean your grill!