It has been designed by a fabricator named Danny and it will look great for your barbecue parties. 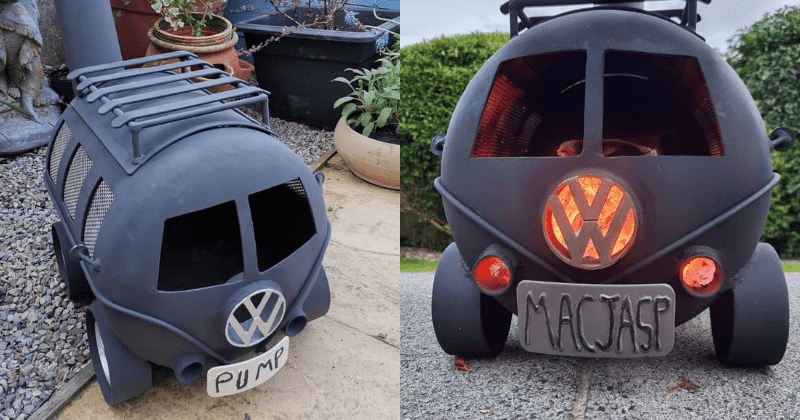 When it comes to barbecuing, a lot of us don't really think about the aesthetics of the burners. A sturdy one that does the job will do for most of us. While there are plenty of them out there in the market that you can splurge your cash on, design sensibilities in cooking one's meat and veggies is probably the last thing in our mind when we make the purchase. But in case this article has awakened such questions in you, we suggest you have a look at this wood burner made in the form the iconic Volkswagen (VW) van. Nothing represents the counter culture and hippie movement of the 60s like this vehicle.

And a burner shaped in this campervan is not just a genius idea but also a true work of art. Take a look at it yourself and be the judge. Aside from the fact that it looks oh so cute in your garden and could be the center of all attention at your beer and BBQ party, we just need to speak about how well it has been made. All the makings of the VW van are there from the shape to the unmistakable VW logo not just in the front but also on all the four wheels. You have the windows on the side that have been sealed within a metal grade for that added protection and to make sure the heat from the fire does not reach you when it gets too hot.

There are even the sideview mirrors (of course just for the complete look. There are no mirrors as such). The grills have been sandblasted and painted with high temperature paint. This makes sure that the paint is protected even at high temperatures of 1,202 degrees Fahrenheit. There is also the distinct rack on top of the van. Besides the element of show, the rack is wedded to the top lid of the grill that can be opened. You can put the wood and coal in through here as well as from the front of the grill. This beautiful burner has been made by a fabricator named Danny who makes such beautiful works of art with usable trash metal.

He also has an Instagram page aptly named as trash_metal_fabrications. In one of his post on the platform, Danny put out a picture of the VW grill asking if people wanted to buy it. It became an instant hit with many inquring the price. These sell for around $300 to $350 depending on what color and finish that you want. On his Instagram and Facebook page, Danny has put up a version of the VW grill that has been painted red on the lower part of the burner and it truly looks beautiful. This will probably also come at a higher price. Besides the VW van grill, Danny has also designed a number of other designs.

There's one that is designed in the theme of Star Wars like the bust of Darth Vader and the famous Tie-Fighter spaceship. Then there is another one shaped like one of the Minion cartoons. Besides Grills, Danny also does other metal designs, not particularly burners that you should definitely go and check out.