Rare Typewriter From 1950s Lets You Type Sheet Music, And Only A Few Remain Today 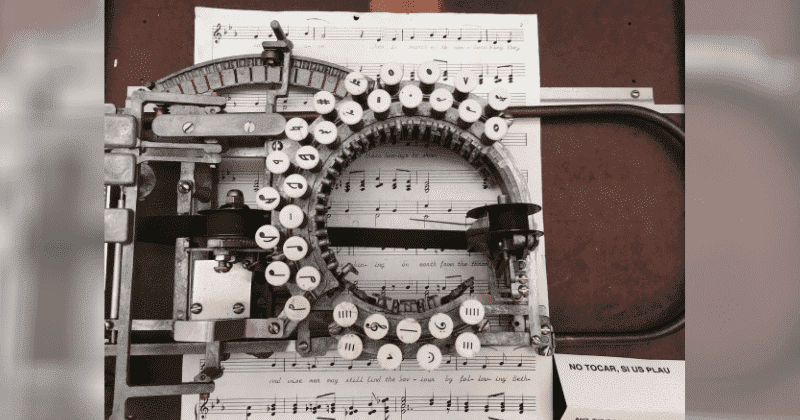 Typewriters have long been used as a means of communication, but have you ever thought of musicians using them to "type" their music? According to Vintage News, since the 19th century and the development of the printing press, typewriters "were introduced to offer a fast and standardized means of writing." Therefore, it was only a matter of time, when this ubiquitous instrument would also be put to use in the form of writing music.

Ever wondered how music was typed before computers? Musicians used music typewriters, like the Keaton Music Typewriter.#amwriting #amreading pic.twitter.com/3jlvnoGR9f

One of the coolest music typewriters was the Keaton Music Typewriter by San Fransico-based Robert H. Keaton who patented in 1936. He described his product as: "A machine for typing music intended for use by composers, arrangers, teachers, and students." Interestingly, the first prototype had only 14 keys, but this was later upgraded to 33 keys, according to My Modern Met. This particular typewriter had an unusual feature: it had two circular keyboards. This was done to ensure accuracy where one could "print characters precisely on a staff and indicate exactly where the next character would be printed." In the '50s, this music typewriter was sold for $255.  It was used by publishers, educators, and other musicians to produce music copies in quantity.

So, how does this typewriter work? Music History Printing reports that "The typewriter has a handle, called the scale shift handle, to the left of the circular keyboard, which moves over a notched metal arc. This moves a long needle, adjacent to the ribbon, which indicates where the next symbol is to be printed. The machine contains two keyboards – one smaller, stationary keyboard and the other larger, moveable keyboard which is moved by the scale shift handle. The smaller keyboard contains bar lines and ledger lines which remain in a fixed position to the staff paper. (Preprinted staff paper is used with the Keaton typewriter.) The larger part of the keyboard contains the notes, rests, sharps, flats, and other musical symbols."  They continued, "There are three spacing keys used for different purposes such as adding spaces for accidentals, grace notes, or dots. The keys are pressed straight down onto the staff paper where the long needle indicates the position. A printing ribbon runs under the symbols which allow for the printing to take place."

Presently, there are several Keaton music typewriters in existence mostly in private collections and in museums. Bored Panda reports that these typewriters are now a rarity, and can be acquired through auctions. They easily retail anywhere between $6,000-$12,000