A photographer in Norway took several pictures of the animal while on a walk in the northern part of the country. The pictures were uploaded online and have gone viral 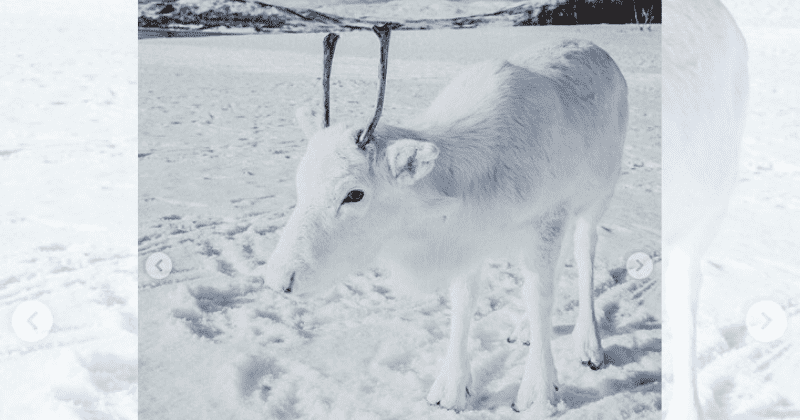 White reindeers may seem like creatures out of fairy tales and magical lands but they are very much from this world. They are, however, extremely rare to spot. In Scandinavian countries, there is even a belief that finding one is a sign of good luck. It seems fortune favored one photographer in Norway who managed to get several snapshots of an extremely cute reindeer calf. One look at pictures of the animal set against a backdrop of pristine white snow, it is sure to make anyone feel like they are in a surreal dream.

This was something that even Mads Nordsveen, 24, the photographer who is based in Oslo, also felt. Describing the moments when he got to see the creature, he said what he experienced was "very magical" and a "fairytale moment", according to a BBC report.

According to Nordsveen, he spotted the animal in the snow while he was on a walk in the northern part of the country. After taking a picture of the creature that nearly "disappeared into the snow", he posted it on his social media handles where the pictures have become extremely popular. It has been liked thousands of times and commented on by many people.

On his Instagram page, Nordsveen uploaded five images of the reindeer in various positions. In one picture, it has its head down while in another, it looks as if it is posing for the photographer sideways and looking at him with one eye. Nordsveen captioned the images: Back to the cold north❄️ Met this white little reindeer in northern Norway. He almost disappeared into the snow!

At the time of the publication, the number of likes on the pictures is over 60,000 with many comments congratulating Nordsveen for the wonderful shots.

An Instagram account with the name ristadesign expressed their disbelief at the pictures when they wrote: He must have walked in trough a portal from a parallel universe ♥️i totally envy you!

Another commenter with the Insta name beautywithinmeforyou wrote:Oh I would love to kiss and hug all day,Thanks for sharing. Another named theojason thought the photographer was extremely lucky to have taken such unreal pictures. He wrote: Lucky you to see one sir, thanks for the share.

White reindeers are extremely rare, according to Dr Nicholas Tyler from the Centre for Saami Studies at the University of Tromso in Norway. However, at the same time, they could be found in the summer months. Unlike what many people would like to think or believe, white reindeers are not the result of albinism.

A blog article in Nature stated that "people have been captivated by white deer for centuries, and perhaps millennia. The ghost-like appearance of these animals has attracted myth, superstition, and rampant scientific misinformation for an equally long period of time." The report further highlighted that "true albino deer are rarely reported" and are also, like many other creatures with albinism, unlikely to survive to become adults. This is because they are born with a number of conditions such as lack of sight that makes them easy prey.  The article further added, "most white deer exhibit a condition commonly known as leucism, a recessive genetic trait found in about one percent of all white-tails. As with albinism, leucism can be found in nearly all mammals."

They come in all colours! This calf is leucistic, which means he has a partial loss of pigment. We usually have one or two leucistic reindeer in the herd at any one time. pic.twitter.com/QZKkdGPnRe

Glen Jeffery, from the Institute of Ophthalmology at University College London, said in leucism, the production of pigment in the skin and eyes are controlled independently. This means the animals do not suffer from visual difficulties or other defects usually associated with albinism. He added, "For animals where pigment generation fails in the eye, the world becomes terribly bright... as light bounces around in the eye because it's not absorbed by pigment."