James Anderson's invoice also contained the message, "No charge for this lady under any circumstances." 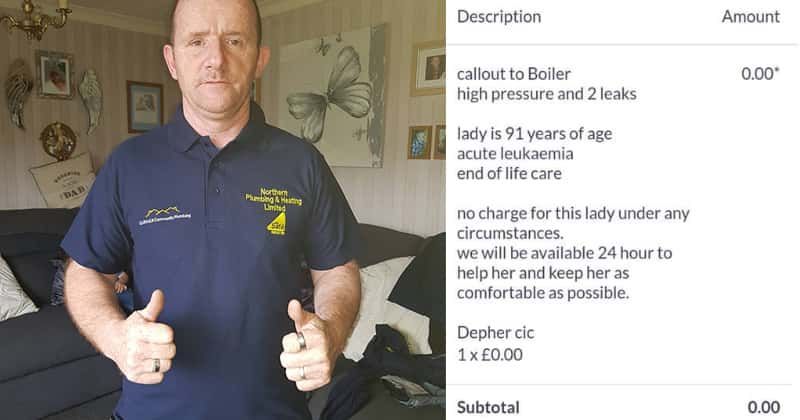 A kind-hearted plumber in the British town of Burnley has gained recognition after a receipt for one of his jobs went viral. James Anderson sent his client, a 91-year-old woman with leukemia, a bill for £0 for fixing a leaky boiler, along with the message, "No charge for this lady under any circumstances. We will be available 24 hours to help her and keep her as comfortable as possible," as well as an assurance that he would work on any of her plumbing issues for free for as long as she lived.

This is the invoice from plumber, James Anderson in Burnley after fixing a lady's boiler - gives me a little hope for humanity after all pic.twitter.com/zddMJO2f4a

Anderson explained that the woman's daughter, Christine, had contacted him as she had a problem with her boiler. "I went round on Sunday September 8th and it was clear that the expansion vessel in the boiler had gone," he told the Manchester Evening News. "I ordered the part so that I could make the repair. But for the next few days, I popped into her house every morning and sometimes in the afternoon and evening to check on the boiler so that her house would be kept warm." Anderson sent Christine the invoice by email, without previously informing her that he would not be charging for the job. "I just went on to my next job," he explained. "At first, the lady - Christine - didn't understand what I meant when I'd said it was free. She was absolutely over the moon and amazed. I told her not to worry about her Mum and that we'd look after her for any work that needed doing." But this is by no means a first for Anderson - the plumber runs a service called Disabled and Elderly Plumbing and Heating Emergency Response (DEPHER), which relies on donation and funding to be able to provide low or no-cost plumbing services for the elderly and disabled population in the area.

Since starting up DEPHER in 2017, Anderson has helped around 2,389 people. The plumber told CNN that he was inspired to start the service after seeing an elderly man in his area being "manipulated" by another local engineer. "It got me thinking about other elderly and vulnerable people — we need to do something more to help the people who need it most," Anderson said. "A lot of elderly and disabled people don't like asking for assistance and if they can't afford something like fixing the boiler, they might not do it and get into trouble. We are there to take that worry away." The plumber acknowledged that he couldn't always provide free services if the company was running low on funds, but that even when the funds run dry, he offers at least a 25% discount to his clients. "As long as I have enough money to fill up the tank in my car, I will be there to try and help the people who need it," he said.

Anderson admits that he gets something very important from helping people the way he does - he just feels good inside. "It makes me feel human, humble and a little giddy inside... I want to expand this service across the country," he told CNN. "I will never give up the fight."