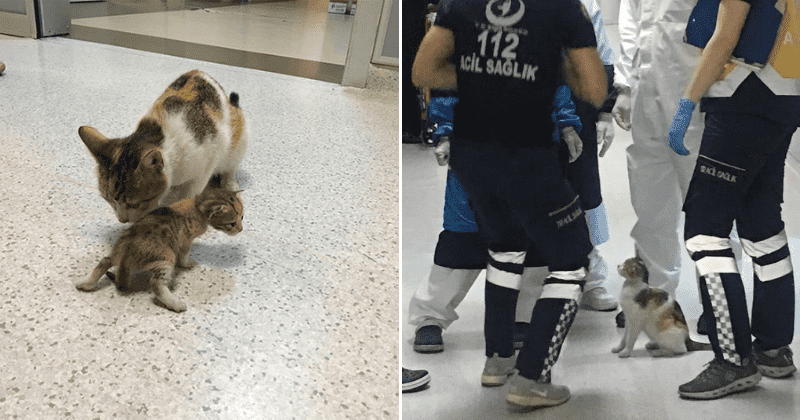 There was a surprising entry at a hospital's emergency room in Istanbul which was something so unlike the staff had ever seen before. Needless to say, it wasn't difficult for the story to make the rounds on social media. Merve Özcan shared some truly amazing photos on Twitter of a mother cat bringing her sick kitten to the human hospital. It was almost like watching a concerned human mom bring her young child to the hospital for a check-up. When the cat brought her kitten in, the paramedics at the hospital immediately surrounded them and started petting them before seeing to its needs.

The Turkish are known for how much they love and respect their stray animals, and their hospitable nature made them provide cats with the necessary help. Local Turkish media reported that the kitten is fine now and no CAT scans were thankfully required. The images were shared by thousands of people in Turkey and were liked by more than 83k people on Reddit. It was truly a heartwarming sight of family love, showing us that animals aren't very different from humans in many ways. The photos showed baby kitten is seen carried by its loving mama to the human emergency room. “Today we were in the emergency room of the hospital when a cat rushed to bring her offspring in her mouth,” Merve Özcan, who originally shared the photos, wrote.

The Turkish media reported that the paramedics at the hospital took the kitten into their care immediately and checked it for obvious health issues. The mother cat stuck by the baby all the way and did not let it out of her sight. While the baby was being cared for, the medics gave its mother some milk and food to make her feel more relaxed and comfortable. This notion was reflective of the local culture too as many Turks are known for their love and care for stray animals, often leaving out food and water for them on the streets.

Two human doctors were first treating the kitten and overseeing the situation. Afterward, the two cats were directed to a vet. Their combined efforts were successful as Turkish media reported that both cats seemed fine. The vet was called in just to make sure that the mother and kitten duo are in good health. The event was all over Turkish news outlets and social media. Many people commented that the paramedics and hospital staff at the Istanbul hospital were to be praised for their kind actions. “This happened in my hometown with a birthing cat. She had problems and walked up to the hospital and started to meow. They helped her and she is now the pet of the doctor who called the vet,” one Reddit user shared. Some also remembered stories of their own where people helped animals in need.

As strange as it may seem, a cat walked into a hospital in Turkey seeking help for its sick kitten. Mother's love works in mysterious ways. pic.twitter.com/kD54sONpgL

"In Turkey, stray cats and dogs are like everyone's pet. You can see food and water for these friends on every corner. Cats are welcome to sleep and live in mosques etc. It's a beautiful place for stray animals," wrote one person. "Cat knows where to get help. This is heartwarming," said another. It was recently reported that Turks were taking to the streets even amidst the Covid-19 pandemic to feed stray animals. Even their government has set up a special council to oversee this issue and wanted to ensure that none of their strays are fed during the pandemic. In Turkey's largest city Istanbul, which has the most confirmed Covid-19 cases, there are some 162,970 stray cats and 128,900 dogs, according to the city's 2018 figures.