Weather Man's Cat Kept Jumping Into His Live Forecast. Now She's A 'Co-Host' On His Show 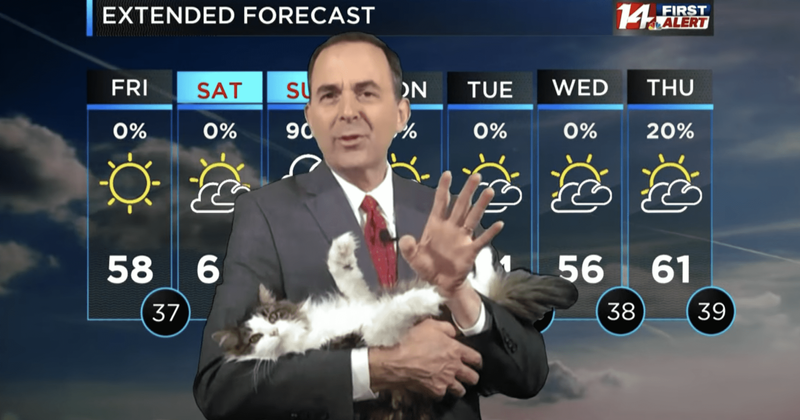 Jeff Lyons, who is Indiana's 14 First Alert Chief Meteorologist, began to deliver his weather forecasts from his living room at home due to the lockdown and closure of office spaces. At work, Lyons is used to delivering broadcasts by himself, however, now that he's working from home, he has a new co-host: his cat, Betty.  Betty's entry into the live reporting was quite accidental as she made her debut last week, 14News  reports. Betty wanted to take center stage as Jeff was giving a live forecast of the weather one day. Without missing a beat, Lyons picked up the furry feline and cradled her in his arms as he went about giving the weather report. And now he's admitting that the response that viewers are giving is great! The station also went on to share a little behind-the-scenes green screen fun with Betty and the hilarious clip ended up airing on television.

Lyons goes about his reports as usual and Betty likes to hang around watching her human do his professional thing. Now, that she's become a regular, she even has her own lower third graphic that says: "Betty the weather cat."

With the new social distancing rules, Lyons had set up his new studio right in his dining room. "Working from home has been an adventure. I have my studio and green screen set up in the dining room. It’s nice to have a 30-second commute after the late news," he told Bored Panda. It was only then did he realize that his adorable cat is an aspiring weather forecaster herself, who kept insisting on being part of the show. Turns out that people love her presence! "Betty was under the dining room table during one weathercast, and the director asked to see her, so I held her up for the camera. We just had the final 30-second weather to do, so I kept her in my arms just for fun…little did I know !"

What's important is that people are absolutely loving Betty's cameos in Lyons' at-home forecasts. Viewers went on to share photos of their own cats on his Facebook page. In addition, fans from all over the world have tuned in just to get a glimpse of Betty. "The outpouring for this silly cat has been crazy," he said. "I’ve spent 34 years in local TV as a meteorologist, so I am used to being known around this area (southern Indiana), but this is something that has really thrown me for a loop!"

As the pandemic continues, social distancing from our friends (and even family) is being encouraged by many health officials from all over the world. In times like these, our pets become our most beloved companions and give everyone a much-needed boost.