“I’m fine with skipping meals, But the cats need to eat,” the homeless man, who locals call Loong Dum, said. 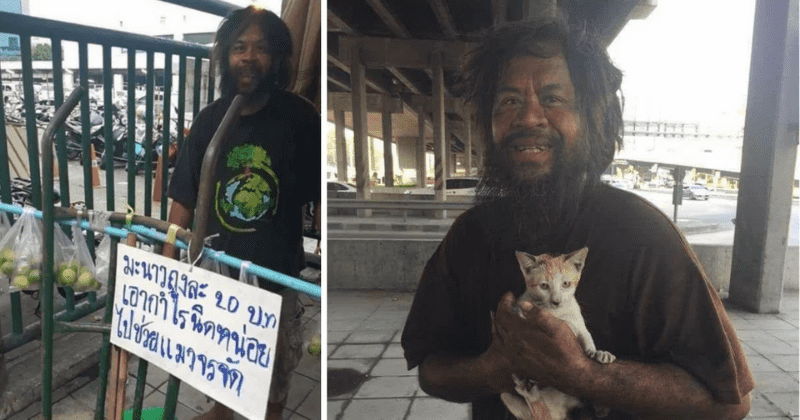 We all love animals, some of us much more so than others. There are those who would do anything for their beloved furry companions, including spending an entire day, month, year, or even lifetime feeding and caring for them. The people who work tirelessly at animal shelters and rescue centers deserve way more credit and attention that they get from the world. Many individuals go out of their way to help animals and hardly get recognized for it. The joy of interacting with another species in a positive or constructive way has to be one of the finer things in life.

One man in Thailand has taken things a step further. He makes sure that the street cats around him are well-fed even when food is scarce. Oh, and did we mention that this man is actually homeless? Cat-lover and Thai resident Waranya Wattanasupachoke was walking by the Chatuchak Market in Bangkok when she saw a homeless man selling limes. This man is called “Loong Dum” by the locals and the photos she snapped of him quickly went viral for extraordinary reasons, Animal Channel reported. People who heard about Loong Dum were impressed that he does all this to raise money to feed the local cats. He put up a sign that read: "20 baht per bag, profits will pay for stray cat’s food expenses”. “I’m fine with skipping meals,” he said. “But the cats need to eat.”

The honesty and humility that this man shows deserve nothing but respect and support. Loong Dum is homeless and hardly has enough to keep himself alive at various times in the year. Yet, despite that, he cares deeply for the stray cats of his locale, as most people are busy with their own lives. Waranya went on to post his photo and story on her Facebook page. She wrote the post in the Thai language, of course, so when it was shared all over the world, it was loosely translated by the automatic feature on Facebook.

Due to that, there were some details that came out incorrectly. That’s a matter that Waranya addressed on her Facebook page by saying she only gave an interview to one source, Thairath. While many foreign websites got the loosely translated parts of the story wrong on some counts, they got the general narrative right. Waranya's post was shared thousands of times and she said that while appearances can be deceiving, the man was friendly, trustworthy, and selling good produce. “Take Loong Dum, for example. Though he is homeless and rugged-looking, he has a big heart.” she said.

She is right. His story is inspiring. Needless to say, when people had heard about what Loong Dum was doing, they happily came by to help him out. They bought his limes and gave assistance to both the man and the cats he cared for under a nearby bridge. Thanks to Waranya, many people were encouraged to come and help him out and have a chat with him. People have rightly dropped off pet supplies to Loong Dum to help him continue taking care of the animals.

Loong Dum was also rewarded for his kindness towards the local cats with a makeover. A good citizen took him to get a haircut and shave. He also got some new clothes. There is not much information on his whereabouts right now, but we all hope that he is safe and well. With continued support from the locals, Loong Dum has a good chance of turning his current situation around and getting himself into a much better position to help himself and the animals he loves so much.