This is a case of menstrual accessory mistaken identity, people. This is why we need better sex education. 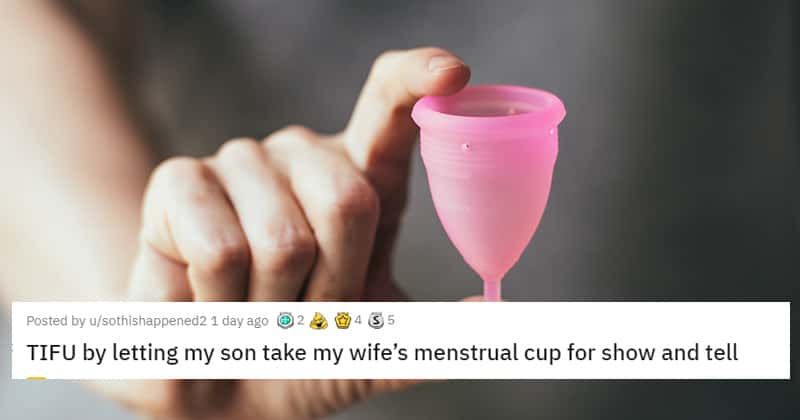 In this day and age, pads and tampons aren't the only sanitary product options for people who menstruate. There are now many more comfortable and eco-friendly options on the market, and the most popular of the lot is menstrual cups. Sadly, this information hasn't reached a large part of the world's population yet, probably due to poor sex education and a simple unwillingness to learn. And sometimes, ignorance leads not to bliss, but to hilarity. Take, for example, a Redditor identified as Mr. Scott, who posted about his ginormous faux pas on the subreddit R/TIFU (Today I F*cked Up), saying, "TIFU by letting my son take my wife’s menstrual cup for show and tell." A reader with some hope in the world may think that this was an opportunity for a little kid to educate his classmates about menstrual hygiene...but we all know it didn't go that way. Scott began his story by explaining that while his wife was out of town, he noticed his son playing with a silicone cup that "kinda looked like a tulip". Over the course of a couple of weeks, the cup became a versatile character in several play scenarios, and Scott assumed it was part of his son's play set. He was particularly fascinated by the fact that it came in its own little pouch.

On the morning the post was made, the family's handy digital assistant issued a reminder that it was Show and Tell day at school, and of course, the son took his favorite new toy along. That's where things started to unravel, as the class teacher asked to speak with Scott while he picked his kid up from school.

Scott did not, in fact, know. Scott's tot had not been playing with an actual toy for the past couple of weeks, and the reality of this fact hit him full in the face at this embarrassing moment, as Ben's teacher explained that the father-son duo had been playing with a menstrual cup for the last few days. He then proceeded to make the awkward situation even worse by needing the teacher to explain to him exactly how the logistics of a menstrual cup functioned. It does, in fact, stay "in there", and yes, it does comfortably fit.

Scott added that his wife was very amused when she found out that her cup was a show and tell prop, and that their son, who will probably hear this story repeatedly when he's much older, still has the cup as part of his playtime. He added, that he wasn't completely unaware about menstrual products - he just hadn't seen this one before. "I grew up with 4 sisters and the only devices I was aware of for periods were to absorb the blood- not collect it," he wrote. "I was also confused by it “fitting” because, like I said, this device helped save a Chickoletta over the weekend. I’ve seen a tampon- they’re much slimmer than this cup is. My wife assures me it fits just fine and she doesn’t even feel its presence after it’s in position."

For those of you who are just as confused as Scott was, a menstrual cup is a silicone device that is inserted into the vagina to collect menstrual blood. It needs to be removed and emptied every 8 hours or so, and can be reused for several years, making it a much more environmentally friendly alternative to disposable tampons or pads. The cups come in different colors as well as different sizes, so everyone can find one that comfortably fits themselves.

The delightful story of mistaken identity had many others commenting to share similar experiences they remembered. As it turns out, a LOT of kids think condoms are particularly durable water balloons.

Some people lamented that the story illustrated the dire need for updated sex education, pointing out that it was a bit bizarre that Scott wasn't already aware of the cup.

And one person asked the most important question of all: