In the times of coronavirus, this might just be the most accurate monster of the year. 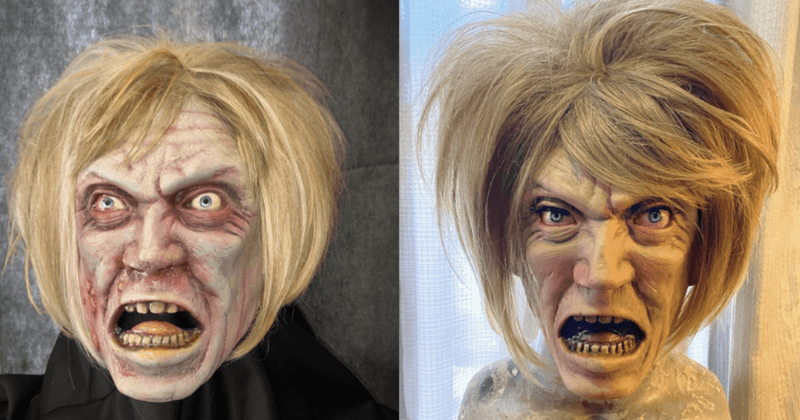 Halloween is around the corner.  One must admit, it has been a scary year with the coronavirus breaking out right at the beginning of 202. But what's made it worse is the emergence of a peculiar personality type that has hogged the limelight almost all around the year and probably a few years before. We are talking about all the "Karens" who have done more harm than good. For the uninitiated, the word Karen has acquired common usage in the modern lingo to represent any White middle-aged women who by her sheer sense of entitlement and privilege belittles others. One Los Angeles artist came out with a clever idea to make a scary Halloween mask representing Karen. And it's not just a clever idea but one that has come at the apt time.

The pictures of the finished product by themselves are quite scary and have been making the rounds on the internet. Jason Adcock is the man behind the mask. "I was starting on this year's Halloween projects and kept seeing "Karens" pop up in my news feed and thought, 'Damn this is the real monster of 2020'," Adock told Business Insider. A description in Etsy where these are sold calls it the "The scariest thing you can be on Halloween!!!!" and one look at it you would probably think it's not a lie. The mask features a "personal paint job, styled hair, lashes" and has been "sculpted, molded, cast, painted and finished" by the artist himself. The description further talks about additional features such as the "vision slits above the eyes" and "additional vents in mouth nose and ears." The mask comes in one one "size fits most" but if in case it is too loose, Adock has a solution.

He says in the description one "can glue a bit of sponge to the inside top." It further added, "Note hair color my differ slightly but will always be blond. Paint may differ." Adock said he has himself has seen a lot of Karens in his life since he worked in retail where many of them seem to display their best behavior. There are two versions of the Karen mask - one with its face twisted into an angry expression with bulging red eyes and a blonde wig. The other, one looks more like a witch who is covered in warts and looks like from the realms of hell. You can check out Adock's Instagram to see what he has created. His masks come at a price of $180. We admit it is not cheap by any stretch but for anyone that wants to make a unique splash this Halloween, this is quite a good buy.

According to a BBC report, the name Karen is associated with the kind of person who demands to "speak to the manager." Their objective is to "belittle service industry workers, is anti-vaccination, and carries out racist micro-aggressions, such as asking to touch black people's hair." But the prominent stereotype of the Karen is the racist kind where they "weaponize their relative privilege against people of color." Take the example Amy Cooper, the 41-year-old White woman who called the cops on a Black man while they were at Central Park. All he did was request her to leash her dog. She was thrown out of her job and even issued a public apology after she became viral. Then we have another Karen who became famous as "BBQ Becky" for calling 911 on a Black dad at a football match. And the list goes on.