It all started with one doll that João Stanganelli Junior made for his granddaughter, but when people saw photos of it, they wanted personalized dolls of their own. 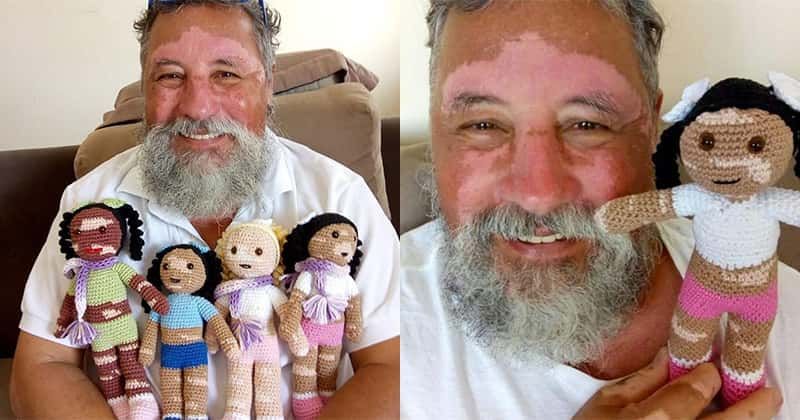 In a world where most toy store shelves are stocked with rows of templatized dolls that look almost exactly the same, it's disheartening for kids to not see any representation of themselves out there. 64-year-old Brazilian grandfather João Stanganelli Junior is trying to change that. Stanganelli, who lives with vitiligo (a non-contagious skin condition characterized by splotchy patches of missing pigment), decided to make dolls with vitiligo patches so that kids who lived with the condition could feel valued. After being semi-retirement from the gastronomy industry, Stanganelli needed a hobby to keep himself occupied, and so he and his wife took up crocheting. His first project was a doll for his granddaughter, and he created one with vitiligo patches so she could have something to always remember him by. But when people in his social circles saw photos of the dolls they quickly started requesting similar personalized ones for themselves. Some began asking for dolls in wheelchairs, while others asked for dolls with hearing aids, according to CTV News, and so, Stanganelli set up Facebook and Instagram pages to showcase his work.

"My view of vitiligo seems to me to be very different from the general, I think it is necessary first that you have vitiligo, after this acceptance you choose what you want to do," Stanganelli told Bored Panda. "I still quote Benjamin Disraeli: ‘Life is too short to be small.'" He continued, "The spots I have are beautiful. What hurts me are the flaws in peoples’ characters." He told CTV News that while his vitiligo hasn’t caused him "any inconvenience" personally, especially since he was diagnosed at the age of 38, he knows others with it aren’t so lucky -- particularly children. The condition can be psychologically devastating to some, and several customers have told the 65-year-old that his dolls have been helping with their self-esteem.

Stanganelli also recently made a doll for author Tati Santos de Oliveira, whose daughter Maria Luiza was diagnosed with vitiligo when she was three years old. Oliveira tried to find as much literature as she could on the matter but found nothing where her daughter could feel validated and represented. "When I learned of the diagnosis, I sought, in addition to treatment, publications for her to feel represented," she said. "I did not find in the market any work on the subject for children. Then it clicked!" Oliveira's book, A Menina Feita de Nuvens or The Girl Made of Clouds, is a children's book about vitiligo. "The book tells the story of Maria Luiza and her special secret. She has spots made of clouds," the author says. "It is a way to treat the acceptance of the disease with delicacy." For his part, Stanganelli tells people about the book as much as he possibly can, saying that it is "a great information tool for parents and children about vitiligo, so I always make it known."