This beautiful rose has captured the imagination of millions of people online for its unique two-tone color. 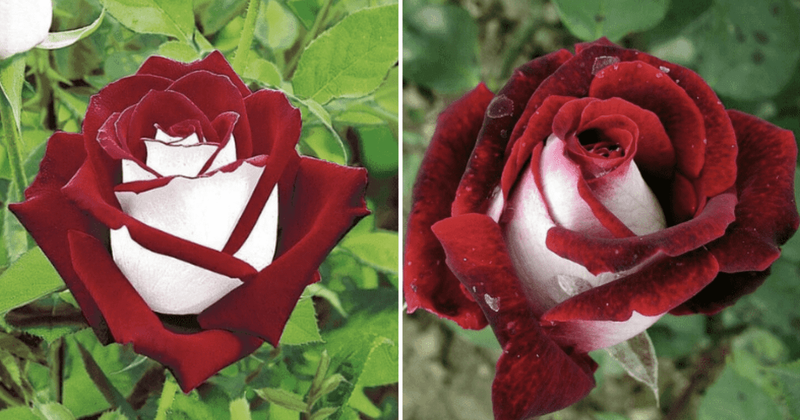 It's time we all stopped to smell the roses and take a better look at it. Known as a symbol of romance, the rose is home to 150 varieties. One, in particular, has taken the world by storm. It is called the Osiria rose, and it just may be available at your local florist.  What makes this rose unique is that it is a blend of two striking colors.

For those who are only seeing or hearing of this special rose for the first time, the Osiria Rose is a hybrid tea rose fashioned from the alleged cross-breeding of hybrid perpetual roses with tea roses. Though they look so pretty, you might even think they're fake due to their unusual color patterns and mostly because it's not a really common sight in gardens. In terms of appearance, the Osiria is said to have a two-tone finish, with cherry or fire engine red on the outside and a nice white reverse on the petals on the inside.

The Osiria Rose first came to prominence in Germany where a breeder by the name of Reimer Kordes managed to hybridize the unique flower. The famous Kordes brand has been known to create some of the greatest rose hybrids since the late 1800s. Impressed by Reimer's latest invention, Willemse France, took it upon himself to introduce these unique roses to the markets in France.

However, the flower was still pretty unknown to the majority of people who were yet to witness this understated beauty. But all of that changed when a few lucky photographers brought the Osiria into the public eye! According to GardeningKnowHow, a go-to site for all gardening advice, Osiria's parentage stems from a combination of the rose bush named Snowfire and seedling unknown to the general populace. The hybridizers tend to do keep their origins a secret deliberately so as to protect their introduction.

The name Osiria comes from the mysterious namesake world which is said to have sunken thousands of feet beneath the oceans. Stan V. Griep, from the American Rose Society, said, "I doubt that you will find Osiria on any map or any Biblical or historical mention of her as, again, like Atlantis, she was a theoretical empire. Just as some of the enhanced photos of her, the lore behind the name is enticing."

Regarding its attributes, the Osiria Rose has a particularly strong fragrance with its petals displaying the perfect swirl. It is said to look stunningly beautiful even though several experts claim that it may not look as fiery red as it is often depicted in the pictures. Griep also has some valuable advice on growing niche flowers like the Osiria. He adds that they may not turn out the way you expect them to. "Be very careful when thinking about adding such rose bushes or flowering plants to your gardens though. What you get when attempting to purchase them will many times not be anything like the photos."

Nevertheless, here are a few more pictures of this amazing flower to show you just how good they look.

"That being said," Griep notes, "Osiria is not a scam; she does exist but the blooms she produces will typically be different than those shown on the internet which makes the heartbeat a bit faster."