'People trying to make this world worse, aren't taking a day off. How can I?' said the man who found and rescued the dog. 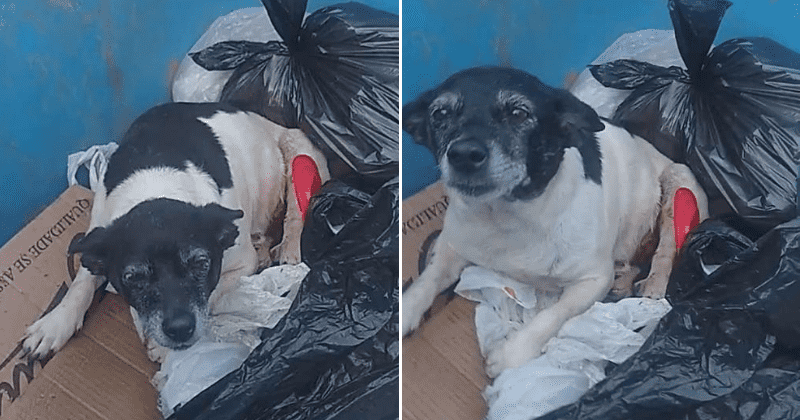 Hurting a dog that had trusted you and was loyal to you must be one of the worst things a person can do. Abused and abandoned dogs are a common sight by highways, empty plots, and for the lucky ones, an animal shelter. But it's not every day that you see dogs literally thrown away like they are trash.

Over the weekend this was the sad scene that Palhinha Rodrigo came across. He saw a sad dog sitting haplessly among the trash that was thrown into a dumpster. Rodrigo shared the heartbreaking video of the conditions he found the dog in on Facebook. Along with the video, the resident of Botucatu, Brazil, wrote, "People trying to make this world worse, aren't taking a day off. How can I?" He continued, "It’s about this case of a little dog thrown in a dumpster, and about so many other cases that occur every day. For you, I ask, don't be discouraged, celebrate every victory, every adoption, every cure."

The dog was lucky to be found by Rodrigo, who not only rescued the dog but also made sure that she got proper medical attention as well. The abandoned dog was immediately taken to the vet of the Municipal Kennel and Rodrigo promised that "we will do everything to make her well." He also stated, "Love is stronger than hate and I have faith that soon we will have more effective laws and that the power of our union will prevail," and added, "Pray for her and as soon as I have news, I'll pass it on to you." He did update the status of the dog, whom he named Florzinha, or Little Flower as translated from Portuguese.

Rodrigo said that after Florzinha had a check-up they discovered a pretty big tumor in her tummy and was also quite ulcerated. "Went to visit her she's fine but needs care," he wrote. Florzinha was cleaned and groomed but the vets decided to give her medicines before taking a call on removing the tumor, according to Bored Panda. "We will not give up. The veterinarians at the Municipal Kennel will provide her with all the necessary care and I am sure she will soon be in a home that really loves her," Rodrigo wrote. He also urged people to help with Florzinha's medication, as well as with prayer and positive energy.

Rodrigo went on to say that he understood that everyone was angry with the person who did this to Florzinha. But he asked them to direct their energy away from cursing the culprit to showing the love and positivity Florzinha deserves. In another update, Rodrigo expressed his gratitude to Petland Botucatu, where Florzinha was being taken care of well. She was given hot water baths and even smelled great, Rodrigo noted. He is getting to know her better and learned that she enjoys car rides and is a very curious dog. She will continue to be treated at the Municipal hospital for now.

Rodrigo even extended his thanks to the people who had contributed towards Florzinha's medical expenses. "After the treatment, if everything goes as planned...Goodbye tumor," he wrote. He urged everyone to keep praying for her. He also reminded everyone that the animal shelter had several other dogs with similar heartbreaking stories. They were all looking for a forever home as well and could really use the love.