This photoshoot is as presidential as it can get. It also happens to be the cutest photoshoot we've seen! 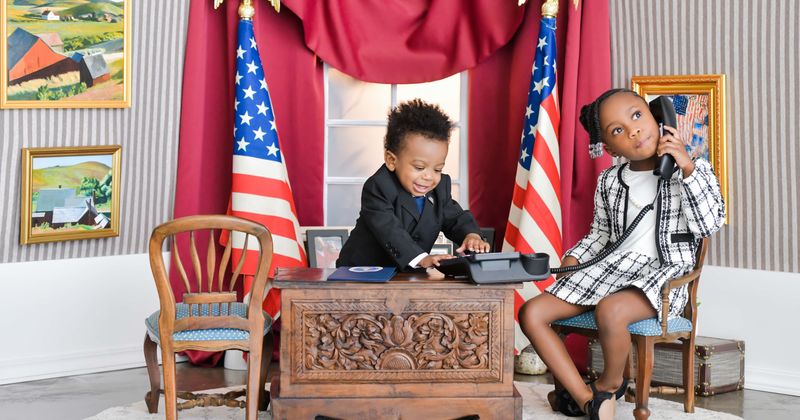 Shan Bonelli-Moore is a mother-of-two and highly determined to instill the best values in her children. She wanted her kids to know that they can achieve anything they set their minds to. To help them understand the world better, even at a young and tender age, she went on to recreate something amazing for her son's first birthday photoshoot. Shan got in touch with Erika Seress of The Pod Photography in Los Angeles and came up with a very "presidential" idea. Together, they recreated the Barack Obama-era Oval Office for her son Maximus' birthday photoshoot. Seress and her team took up the challenge with open arms and they ended up making the cutest presidential photoshoot we have ever seen.

"At The Pod Photography, we create custom kid photo sets based on parents' passions and interests. In this case, our client wanted to make a statement with an ever-present reminder that their kids can achieve anything – even President! They wanted their son's first birthday photo set to be the Oval Office from Obama's Presidency," Seress told Upworthy. "We are best known for our custom set design, and Max's mom knew that we were the only ones who could pull off her vision!" While recreating the nation's highest office was no walk in the park, The Pod Photography team proved to be more than up to the task.

"Designing a set this detailed is very labor-intensive and challenging to execute since there are so many pieces to create. The final set looks effortless, but it was about 30 hours of research, sourcing materials, and testing before the day of the photo session," revealed Seress. "I was so excited by the family's inspiration for their images and set out to create a kid-scaled Oval Office down to the smallest detail. I purchased fabric and made the wallpaper, curtains, and re-created the exact artwork on the walls. But I am most proud of the Resolute Desk, which we sourced and customized from a local furniture store. We even printed photos of the little guy's family to fill the famous frames behind the desk!"

For little Maximus, it was a chance to dress up in a very professional manner early on in life. It was just amazing to see him decked up in the fine suit they had specially made for him as he answered mock calls behind his toddler-sized Resolute desk. You may be excited to know that Maximus has already "launched" his own presidential campaign for the year 2054 and also had a custom cake made by Top Tier Treats that is designed to look like a classic presidential button in red, white, and blue. Max's big sister Sydney also gave him company in their rendition of the Oval Office. It gave us a great glimpse of how amazing a woman president would look behind the Resolute desk. "The kids were really excited to play with the props and make-believe on the set. The kids and family loved their final images and were really happy that I could bring their vision to life," said Seress.

Shan thanked The Pod Photography on Instagram for the stellar job they did with the photoshoot, writing: "Loved celebrating Maximus on his birthday. This photoshoot was the cherry on top. You took my vision and recreated it just as I imagined it in my head. Thank you for helping us kick off the campaign and we hope to have your vote in 2054." Seress, meanwhile, said: "Perhaps these photos, and the hope and optimism they portray, will encourage and inspire parents and kids everywhere to follow their passions and achieve their dreams. I also want parents to see that they can embrace issues that are meaningful to them in a lighthearted, creative way to include and influence their children."