trending celebrity people lifestyle news animals
Parents Are Limiting The Amount Of Water Their Teen Son Drinks, Ask If They Are Wrong

Parents Are Limiting The Amount Of Water Their Teen Son Drinks, Ask If They Are Wrong

The parent of the 14-year-old stated that her son drinks too much water "for his own good". 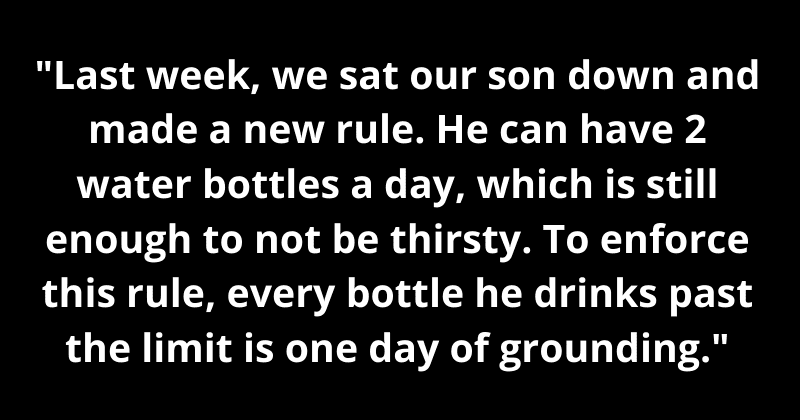 Drinking water is a good thing... for the most part. There are obviously places on Earth, especially in third world countries where access to clean drinking water is still a privilege, and those of us who have never suffered from a lack of water should definitely hold this in mind in case we ever waste it. That being said, an odd case popped up on the popular Reddit thread 'Am I The A**hole' where a parent stated that her son drinks too much water "for his own good".

The parent begins by saying that; "I have never done this before, so apologies for any issues.". The mom goes on to say: "My son (14) drink ALOT of water. If we don't regulate it, he will drink 3,4, or 5 bottles of water a day. He just says he is really thirsty."

She adds: "The problem is tap water in our area is terrible so he can't drink that, but buying so many water bottles is insanely expensive. We spend hundreds of dollars a month on water." To be honest, water is the source of life and a basic human right and need. There can be no compromises on the quality of water supply and distribution as a nation's very backbone rests on it. The parent goes on to say that: 'We took him to the doctor a couple years ago to see if there was an issue, hes fine. He just drinks alot of water. Me and my husband are kinda tired of this, so last week we sat our son down and made a new rule. He can have 2 water bottles a day, which is still enough to not be thirsty. To enforce this rule, every bottle he drinks past the limit is one day of grounding."

It certainly looks like this boy is giving his parents the kind of concern that rarely comes across in raising a child. Parents of 14-year-olds are usually more concerned about their unhealthy sugar cravings, their choice of company, and the direction in which they are heading in life. However, drinking too much water is pretty much strange any way you look at it. The mother completes her post by saying: "We got some push back at first but it wasn't a problem until yesterday, where he drank 5 bottles of water in just 24 hours. We followed the rules and grounded him for 3 days. He was really mad and said its totally unfair, but we reminded him those were the rules. I talked to my sister about this and she said it was crazy. So I decided to post it here."

Now that we have heard this version of the story out, we wanted to see what others in the thread thought of it. At first, many users seemed to think that it was a troll who made that post. Her son's drinking rate seems to be on par with an overly active metabolism that may be likened to his lifestyle. Maybe he liked to play outside a lot more or was just dehydrating at a faster rate than his peers. Either way, limiting his water supply is far from the right decision to make, as many users pointed out as they deemed the uploader with a 'YTA' tag. Several individuals brought up scientific stats to back up the son's water consumption. Some other recommended a change in the kid's diet and other measures... anything but put a limit on his water consumption.