'Skinny pigs' are a particular breed of the guinea pig which are naturally fur-free. 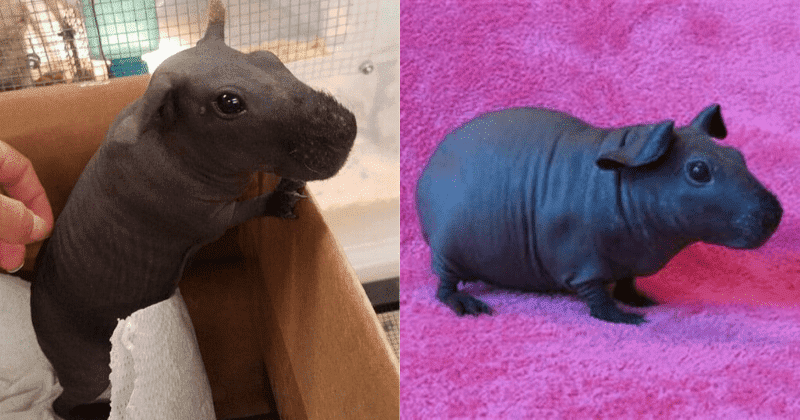 Say hello to a hairless breed of adorable animals that look like tiny hippos. Just because they don't have any fluff on them doesn't mean that they aren't as cute as a button.  Skinny Pigs are a breed of guinea pigs that do not grow hair on their body. Even though most of their skin is hairless, there is still some fur on their muzzles, feet, and legs. This makes them perfect pets for anyone with allergies.

They require minimal space and are relatively easy to care for, reports Wide Open Pets. A series of photos of the hairless guinea pigs went viral after being shared by the Facebook page Awkward Animals.

The Skinny Pig is not an old breed of animals. In fact, these pets were first developed in 1978 by scientists! For dermatology studies, the researchers crossbred a haired guinea pig with one of their hairless lab strains due to a spontaneous genetic mutation. This resulted in a brand new breed. Now they are popular house pets in parts of North America and Europe.

Ian Haggerty, who often posts photos of his two rescue skinny pigs Ki and Tio on Instagram, told Insider he got his pets from Critter Rescue South Africa just over two years ago. "They are seriously the cutest little guys I have ever owned," he said, adding that they don't bite. "They make the cutest little sounds."

He also said that they are "very easy to keep" and have "a smallish indoor cage for nights and a huge outdoor cage for the day time." "Luckily here in South Africa, it doesn't get too cold during the day in winter and if it is very cold, they stay indoors," he said.

Christine Anthony, owner of "Handsome Hagrid the House Hippo," told Insider that her daughter bought the little critter for her in Pennsylvania at a PetSmart. "I like having him because he's just so darn cute and he's the closest I'll ever get to having an actual hippo," she said.

A huge hippo fan, she added, "He even has his own room where he is surrounded by a lot of my hippo collection, even though there are hippos in almost every room of my house."

However,  there are certain things to consider before getting this unique pet. Parents "need to be extra careful to protect their pets from harm." "I have to make sure the house stays in the 70s because of his lack of fur and I don't take him out of the house unless it's warm," Anthony told Insider. "I keep him shaded from the sun when I do take him out so he doesn't burn."

She added, "I have to keep his toenails clipped so he doesn't scratch and break his skin and I have his cage lined in fleece to prevent skin irritation." However, she said that ultimately "he's really very easy to care for."

TreeHugger reported that the lack of fur means the tiny hippo-like pet should be kept indoors most of the time. They also need more food when compared to regular guinea pigs. This is because they have a higher metabolism as their bodies work harder to stay warm. They can cost up to $150 to purchase and they even come in different skin pigmentation that offers variations in color, including chocolate, cinnamon, silver, golden, white, and more.

There are also two breeds of the animal. The first is the hairless guinea pig that came from the lab and the other breed is called the Baldwin. Baldwins are born with hair that falls out gradually over the first few months of their life. From then on, they are entirely bald. Baldwin guinea pigs can be fed a good guinea pig diet of fresh green hay, topped up by veggies, fruit vitamin C pellets, and freshwater, according to Online Guinea Pig Care.

Also, it is recommended that they are bathed every 2 weeks at a minimum because of their lack of fur. Why do they look oh-so cuddleable despite having no fluff?

Why is this bald Guinea pig in a bath the cutest thing I've ever seen pic.twitter.com/4AUq9twTxz