What sets the intelligent people apart from their peers is that they often think they can get their best work done in the dark of night. 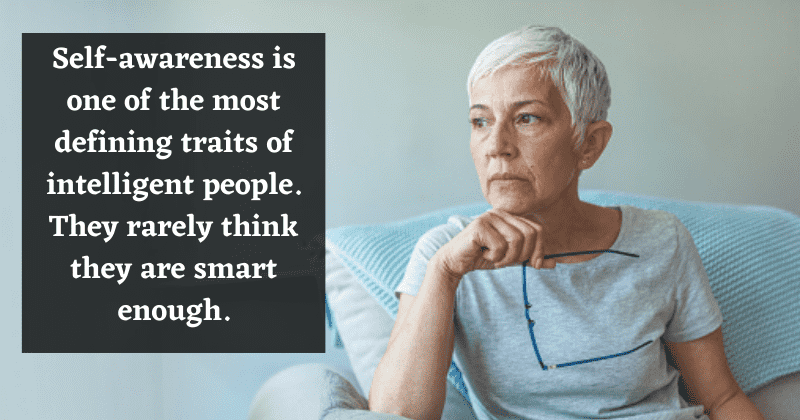 There's no one true marker to identify an intelligent person. Sure, some people exude intelligence with every word they speak while it's not as obvious with others. But one thing is for certain when we put together the common traits an intelligent person possesses a pattern begins to emerge, which then can help us understand how different they are to people around them. In this article, we will look at a few signs that are seen in intelligent people.

1.  You Are Curious About The World

Intelligent people know that even as we stay stationary for several hours in a day, the world moves on at a furious pace. They are often very curious about everything and always eager to learn and tend to carry a 'polymath in the making' vibe. They are knowledgeable about everything and can hold a conversation on any topic for hours of end and are open to learning if they aren't quite as proficient. This doesn't necessarily mean burning through a dozen books in a week but generally being aware of how the world around them is going and spot the unique connection between things others don't seem to spot.

2. You Are Compassionate And Empathetic

"There's a correlation between high emotional intelligence and high IQ in psychological assessments," says Christine Scott-Hudson, speaking to Bustle. Emotional Intelligence or EQ is a person's ability to understand and care for other people's emotions and the impact their actions can have. This means they tend to bring a new set of solutions to solve an emotionally-charged situation because they aren't just ruled by their brains, they listen to their hearts just as much.

3. You Are The Silent Type

Intelligent people often get branded as introverts or socially awkward, and are generally the quiet type. This doesn't necessarily mean all silent people are intelligent, but that they tend to access a situation carefully rather than jump the gun to speak out of turn and feign smartness. They also tend to avoid pointless small talk and feel re-energized and rejuvenated after a discussion on a major topic they're interested in.

4.  You Are Often Self-Critical

There are some insufferable narcissists out there who think they can do no wrong and then there are the intelligent ones who think they're never right, even though they are most of the time. This is not to say they aren't wrong, but since they try to be obsessive perfectionists they weigh their words very carefully before giving them a voice.

Self-awareness is quite possibly one of the most defining traits of intelligent people as they rarely think they are smart enough. Put them in a room full of people and ask them how smart they are compared to the others, and their self-critical and self-aware nature would put them somewhere in the bottom half without a moment's notice even if they happen to be among the smartest bunch.

With all the streaming and in general the open nature of the internet, just about everybody considers themselves a night owl. But, what sets the intelligent people apart from their peers is that they often think they can get their best work done in the dark of night, when the entire world is fast asleep rushing into the final stage of REM sleep.

Intelligent people are very observant of their surroundings and can generate a clear understanding of things happening around them, sense patterns, and judge outcomes accurately. This is not a trait a lot of people can boast and it comes because they are in a state where they are present yet detached just enough to gain an overview of a situation.