Tasha Hancock, a Black woman, and Marne Litton, a White woman, have been neighbors for six years. They decided to send a message to people ahead of the election day. 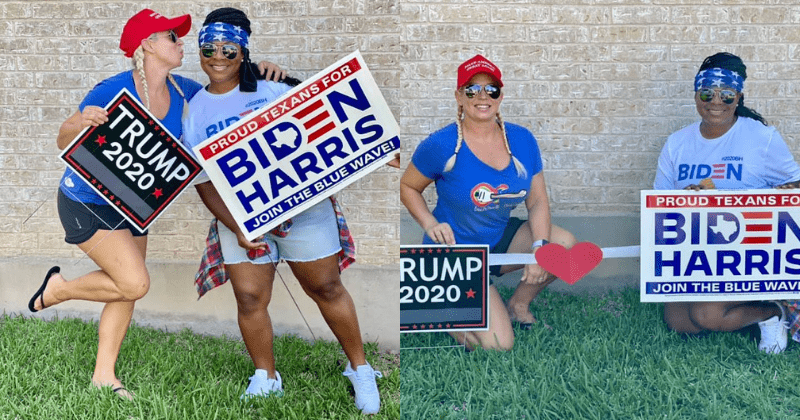 A political divide like never before is being seen in the US. The tension between Democrats and Republicans have reached a boiling point, with supporters of President Donald Trump and his challenger to the post, former vice-president Joe Biden ready to cut each other's throats in support of their respective candidates. Hopefully, only metaphorically. Recent events have shown that the two respective sides cannot see eye to eye on any issue. The candidates themselves have not helped matters, fanning the fires further. This could clearly be seen in the recent presidential debate with Trump getting personal with Biden on a number of occasions and Biden also losing his cool a few times.

“We live by different beliefs”

In this tense political climate, two neighbors - a Black woman named Tasha Reese Hancock and a White woman named Marne Litton - in Texas decided to take a stand. These two, who have been friends for years, wanted to show the world it is possible to have different political views while still respecting and loving each other. And they are inspiring many people ahead of election day to do the same.

Marne and Tasha, two Texas neighbors, teamed up to show others to love one another, and say they'll be going to the polls together Nov. 3!​ https://t.co/be7YhGGpza

Both women have a friendly relationship that extends to dinner parties at each other's home and borrowing stuff. They even have each other's kids over. They never felt the need to coerce each other to their political views or get angry when they did not agree on a particular issue. On her Facebook page on September 28, Litton posted a number of pictures of them posing with political placards of their respective candidates but there was no sign of animosity. Rather there was laughing, hugging, and kissing, which is rare when a Democrat supporter meets one that follows the Republican party. Litton tagged Hancock in the post and wrote she was "really saddened" by the way the political conversation has devolved into mud-slinging matches everywhere and "how people have been treating others."

This is great, and something we all need. But supporting anyone who supports trump is supporting racism, misogyny and pedophilia, period.

"Differences in opinion regarding a lot of matters....school, election, covid, etc. I do not understand how one person cannot respect another person and their point of view even if we don’t agree. So in light of that my neighbor, and FRIEND, and I got together in hopes that maybe this will spark some kindness and acceptance! We love each other! She’s had my kids over for movie night, we’ve had them over for dinner, we are always borrowing things from one another and bringing each other goodies," wrote Litton. She added while there may be a difference in "skin color, political beliefs" but one thing that was the same between them was "mutual love and respect." She advised people to take a step back and "take a damn breath and calm down!" while adding, "Cheers to loving my neighbor even though we don’t see eye to eye on everything."

Speaking with KVUE, Hancock said further, "We're both mothers. This is to demonstrate to our kids that you can have different opinions, you can look different, and still respect and love one another...It's all about loving thy neighbor." Litton, who has been neighbors with Hancock for six years, added, "On our neighborhood page, I would see a lot of issues with people stealing signs, throwing paint on signs, punching holes through them, a lot of bashing back and forth." She said she wanted to change the narrative. "So, I may think one way about one subject and that's why I vote a certain way but, that doesn't run my whole life. That doesn't mean I'm a bad person or my kids are not good people or we're not a good family and vice versa," added Litton.

The pictures of the two posing in support of the candidates of their own preference were also shared on their neighborhood's page and became viral. While many thanked them for their actions, there were many who did not agree with them believing that certain political positions are human rights and morality issues. "People were like, 'Thank you.' This is how it should be, thank you for acting like adults," Litton said. Even though their votes are going to be different on Nov. 3, the duo said they will be going to the polls together to make their voices heard.