It also contains antioxidants that help your immune system. 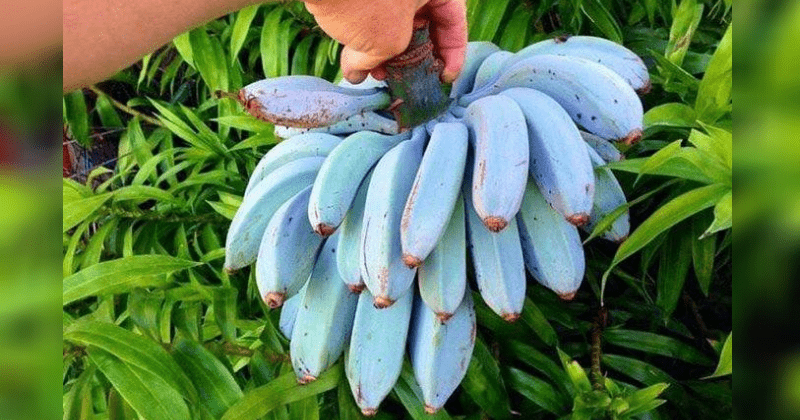 Blue java is a type of banana that is, of course, blue in color and tastes just like vanilla ice cream. Now if this isn't a good enough reason to get them we really don't know what would take for you to try this delicious fruit. These bananas are known by different names in the few countries they are found in. In Hawaii, they are known as the ‘Ice Cream bananas.’

In the Philippines, these are known as 'Krie' and and ‘Cenizo’ in Central America. Some say the flavor of this banana is just like vanilla ice cream. Those who have tasted the fruit said that it reminds them of vanilla custard or a soft serve and we can't help but marvel at mother nature's wonders and gastronomical delights. The bananas have a distinct silvery-blue color when they are not ripe. They turn pale yellow once they do and they are not just eaten raw but also cooked, baked, and fried. They could also be pureed and frozen too for other purposes. Many even like to use these as spreads with their bread and toasts.

These bananas are cold-tolerant and found mostly in places with tropical climates. Along with the flavor, we can't highlight enough the health benefits of the fruit. They contain a specific kind of fiber called pectin and resistant starch when they are not fully ripe that helps in moderating blood sugar levels after meals. Pectin is also known to prevent colon cancer. These also have antioxidants that help your immune system and are rich in vitamin B6 and vitamin C needed for the body to synthesize its own serotonin.

A single banana has 0.4 mg of vitamin B6 (the standard requirement for adults is 1.3 milligrams) and with a flavor that tasty, you can't just have a single banana. The potassium, magnesium, and proteins in the blue java bananas are also extremely beneficial for the body in numerous other ways. One of these is keeping the heart healthy and functioning properly. It also helps in lowering blood pressure.

The non-digestible fibers like cellulose, hemicellulose, and alpha-glucans help the digestive system to run smoothly and help in regular bowel functioning. Ken Love, the executive director of Hawaii Tropical Fruit Growers, said, "There are over 100 types of bananas in Hawaii, all tasting different. It's really the diversity that's interesting." While blue java bananas are not the sweetest variety of bananas out there, they definitely are one of the most popular.

He explained that the blue java banana is one part sugar and two parts starch. "In this case, the starch converts to sugar when they're fully ripe," he said while adding that he himself likes used this variety of bananas in his toasts. Besides the ice cream bananas, there are other varieties with a distinct taste. There's one called the apple bananas that has a sweet citrus taste and another one called the Mysore banana with flavors of berries, that people would surely love.