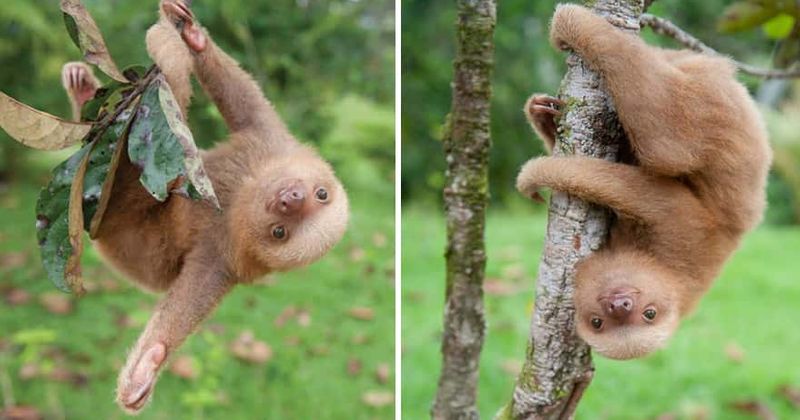 Whenever you see sloths in documentaries, wildlife programs, or even cartoons, you'll notice that their relaxed attitude and slow movements are their most evident characteristics. In fact, it might be quite a sight to witness a race between sloths and tortoises who are again, well known for their measured and often labored motions. The slow movement of sloths is such a major characteristic that their very name 'sloth' is derived from the word slow.

Sloths are primarily arboreal mammals noted for their comical features, which include hanging upside from the branches of trees and making funny expressions. Though their ancestors lived in North America, modern sloths live in Central and South America, enjoying the tall trees found in rain, cloud, and mangrove forests. However, due to globalization and the subsequent need for rapid urbanization, their habitat i.e. the forests are slowly being eroded away, leaving them at risk.

Thankfully, this alarming issue has led many people to step forward and make a change. The Sloth Institute from Costa Rica researches sloths and aims to educate the world with timely and accurate information about the species.

Speaking about her love for sloths, Sam Trull, co-founder of the Sloth Institute, told Manhattan Book Review: “I think one of my favorite things about sloths is that they mind their own business. I realize that the ‘circle of life’ requires all kinds of species of animals, including mischievous monkeys and carnivorous cats, and no offense to those animals that need to eat other animals to survive. But how can I not be drawn to species that just want to eat their leaves, relax in the sunshine and the breeze and have a good scratch?! In addition, they have a very curious and playful side, something most people have never and will never see, but it is definitely the most endearing thing I have ever seen.”

According to Bored Panda, Trull has been nursing injured and sick baby sloths since 2013. These animals are nursed to good health before they are returned to the wild. Talking about the founding of the institute, she said: "I co-founded The Sloth Institute because I wanted to spend all of my energy and time getting my hand-raised babies back into the jungle. Sloths need trees to survive and not just any trees, but the right trees and enough trees. They need a connected and healthy forest.”

Considering that sloths have this unique predisposition attached to them, they are an easy target for the tourist industry. Profit-minded individuals and enterprises frequently take these animals out of their natural habitat to make a quick buck as people love to touch and cuddle with them. This is where Trull's foundation comes in and works to stop such outright abuse and to fight for their good. Hence, she urges people to be responsible tourists and not indulge in activities harming ecological balance. “When visiting a country with sloths, never pay to take a picture with one, hold one or pet one.”

“Those industries steal sloths from the wild for tourists to touch and the sloths die from stress," she adds. “For a sloth living near humans just trimming a tree can lead to death, let alone actually cutting an entire tree down.” While increased human activity near forests is harmful to wildlife in general, it is even more so with sloth due to their limited physical ability. “In addition, humans come with electric wires, cars, dogs, and all things that affect every wildlife species, but especially sloths that do not have the ability to jump away from danger or run quickly across the road.”