The rare pink dolphin was first spotted swimming in the waters off the coast of Louisiana in 2007. 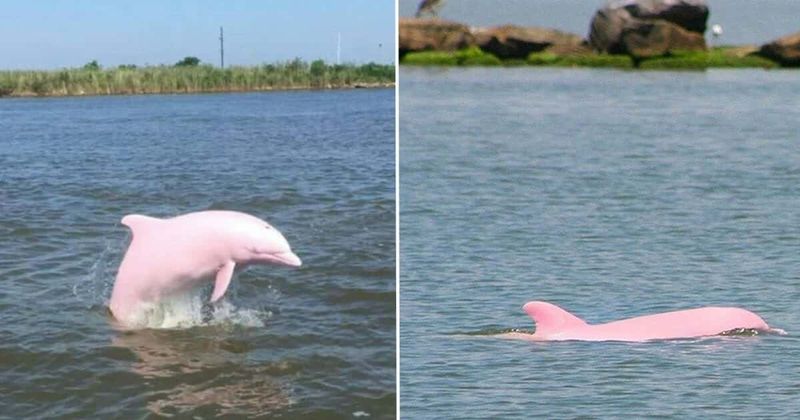 Mother nature can sometimes give us some very intriguing specimens that can be described as extra-ordinary. When you read or see them online on social media platforms most of you would probably think it's part of some elaborate hoax or photoshopped pictures to get more internet traffic. One such example is a pink (albino) dolphin (different from the endangered 'pink river dolphins' in the Amazon) that is probably swimming in the waters off the eastern coast of the US as you read this article. It was first spotted swimming in the waters off the coast of Louisiana in 2007. And since then the dolphin who was lovingly named "Pinky" (no prizes for guessing why and how she was named) and has been regularly sighted in the same parts by many fishermen and tourists alike. Pinky has become a sort of celebrity.

Captain Erik Rue of Calcasieu Charter Service is known as the first person to have spotted and photographed the rare dolphin. He was out on a boat and noticed her swim next to another dolphin who seemed like her mother but looked nothing like her. In the subsequent years, Pinky has been spotted swimming alone or with a pod of other dolphins. The Calcasieu Charter Service website described her as an "extremely rare and beautiful" creature who Rue first saw and photographed on June 24, 2007, during a fishing trip on Calcasieu Lake south of Lake Charles. "It appears to be an uncanny freak of nature, an albino dolphin, with reddish eyes and glossy pink skin. It is small in comparison to the others it is traveling with and appears to be a youngster traveling with mama," the website read.

The area where Pinky was first spotted is one that she frequently visits. After many years there were reports of her with a similarly looking pink baby dolphin. This gave rise to the speculation that Pinky might have become a mother. Rue has spotted the creature many times since his first time in 2007 and even saw her when she was pregnant according to a WGNO report. Besides Rue, other fishermen have also spotted Pinky in the same place. Rue says Pinky has always been sexually active. Reports of Pinky swimming with another with pink dolphin first surfaced in 2018 as this KATC report highlighted. A video by the channel showed two pink dolphins jumping from the water of the Calcasieu ship channel.

In 2017, the two Pink dolphins were spotted by a couple on the ship channel. Bridget Boudreaux shared the video with the channel and told them, “It was amazing to see. Like I said we saw two but I couldn’t get both on video at the time. I was astonished.” She said one of the dolphins jumped by their boat and immediately caught their attention. Then another dolphin jumped again. “My reaction, well I was in awe about it. It first came up straight out the water and I was like, ‘Whoa! That was a pink dolphin! Stop the boat!!'” Boudreaux said. The dolphins in the video seem to be following a ship on the channel headed towards Cameron Parish. Boudreaux said she did ultimately see two pink dolphins but one of them disappeared before she could get a good picture of the two.

After the reports of the two dolphins, the channel even asked its viewers to suggest a name for the new dolphin. Names such as "Brain" (referencing the cartoon “Pinky and The Brain" of the 90s) was hilariously suggested. Other names such as "Rose" and "Leather" were also given by the channel's viewers. There is an entire species of pink dolphins found in the waters of the Amazon found in countries such as Bolivia, Brazil, Colombia, Ecuador, Guyana, Peru, and Venezuela. However, Pinky and her calf do not belong to the same species.