It is important to note that as friendly and social these creatures are, they are also high maintenance pets. 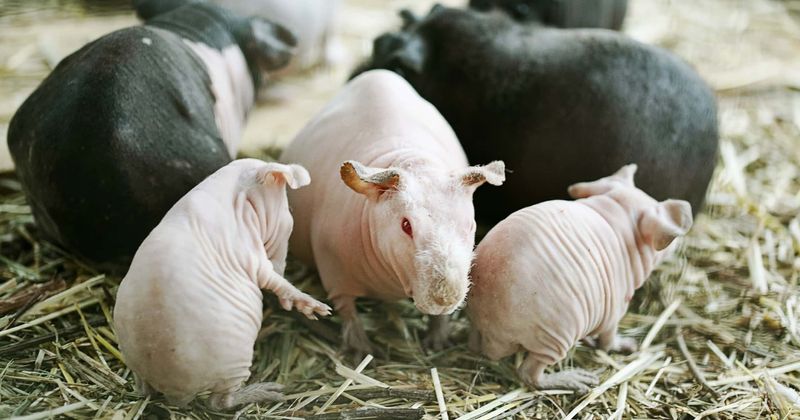 There is a new rage among pet enthusiasts and it's keeping tiny guinea pigs that resemble pocket-sized hippos as pets. It does take time to get used to the sight of a rodent-like creature that is more or less hairless but trust us, they are pretty homely and cute as heck. But what are these pets and where do they come from? According to Tree Hugger, this specific breed of guinea pigs called the Skinny Pig has come as a result of breeding. In 1978, a colony of these guinea pigs was bred in a lab in Canada. This particular colony had a very rare genetic mutation that led to hairlessness in the animals. Researchers continued to breed more guinea pigs with the mutation, the result of which are these cute and tiny creatures. It is also noteworthy that guinea pigs have been domesticated since 5000 BC in Peru where the animals originally come from.

These new ones are just a few decades old. The hairless guinea pigs have been deliberately inbred to keep the strain going. And with interbreeding, there are a number of problems. For one, these animals are not resilient due to their weak immune systems and are prone to many illnesses. However, over the few decades and many generations of breeding, scientists have been able to make these creatures healthier and better suited as pets. The newer and improved strains of these guinea pigs are much healthier. Of course, it's a matter of concern that the lives of these creatures have been played around with due to various experiments. Animal welfare organizations and activists have expressed concerns about this but they continue to be sold in the pet market and are very popular.

However, just because they are less prone to disease now, it does not mean keeping them is a cakewalk. Since they don't have any hair, they get cold easily and therefore need to be always kept warm. When brought outdoors, pet owners should ensure that it is a relatively warm day. They should also apply sunscreen to their sensitive skin and have to make sure that their pets do not come in harm's way. Without a protective coat, a simple injury could prove fatal. Since they need to keep warm, their metabolism also works at a higher rate which means they eat more than their bigger cousins. And it's just not any kind of food you can give them but ones which are specially meant for them. Of course, there are the positives of keeping these creatures. They are the best pets for people with allergies since the animal has no fur. They are also extremely sociable and gregarious.

An added factor is that their skin pigmentation could be anything from silver, chocolate, gold to cinnamon, white, and even more. Besides the Skinny Pig, there is just one other breed of these hairless guinea pigs called the Baldwin guinea pig. According to Online Guinea Pig Care, "Baldwins are completely bald whereas Skinny guinea pigs are bald with tufts of hair on their feet, legs and faces." Other than this difference in their coat, the two breeds are more or less the same. However, Baldwin's origins are different since they "were originally a spontaneous mutation from White Crested cavies belonging to a Californian cavy owner who was breeding them for show." Similar to the Skinny pig, the Baldwins also need special attention when it comes to their food, giving them warmth and even when and how to give them a bath.

"Because of their lack of hair, It is recommended that they are bathed every 2 weeks at a minimum. If they are not bathed their skin does become dirty and grimy. They do not like any shampoos that have fragrances so use plain shampoos," according to the website.