The game is brought to you The Dog which has collaborated with Monopoly and USAopoly to bring the game to life. 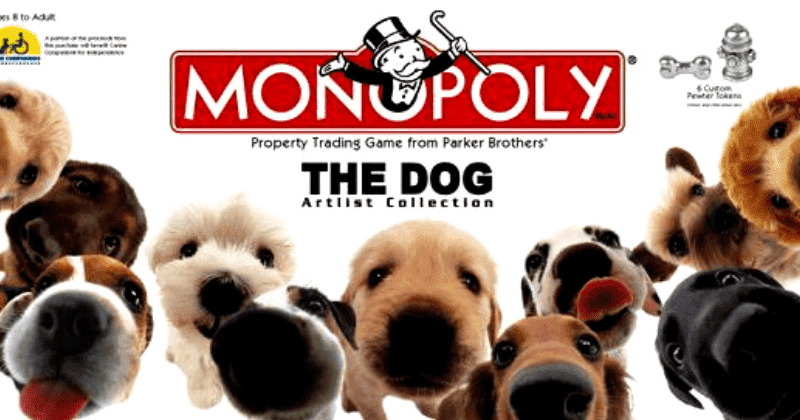 If you list games that have ruined millions of relationships, Monopoly often ranks at the very top. Although created for fun, the game is notorious for being anything but that for most of us. Thankfully, there's a far friendlier version of the game in town now—one that pet lovers would scramble to buy the moment they hear about it. What's that you might be wondering? It's Dog Monopoly. Yes, you heard that right. Rather than own up real estate and harass your friends over rent, you will be collecting various breeds of dogs, and as the rules go, the one with the most dogs will reign supreme.

Called Monopoly - The Dog, the game is brought to you by a Japanese company simply known as The Dog which has collaborated with Monopoly while USAopoly has taken over the licensing duty from Hasbro. Describing possibly the best board game ever, the company launched in 2002 revealed: "THE DOG is the highly successful puppy photography franchise from Japan. Launched in 2000 as a collection of calendars and postcards, these adorable images took over the store shelves and became an instant hit with collectible plush, T-shirts, stationery and so much more." So, rather than fetching tissues to wipe away your tears, you can play "Go Fetch" with this special edition trading Dog cards than fake cash. In a copy explaining the game, the company added: "Mr. Monopoly celebrates Man's Best Friend in this special edition of The Dog Monopoly game showcasing America's most irresistible canine companions."

Officially titled "USAOPOLY Monopoly: The Dog Artlist Collection", the game is available for purchase on Amazon for $99, which seems fairly reasonable considering it was over $170 just a few months ago. Also, considering the country has been seeing a spike in coronavirus cases limiting your experience outside, it's better to have something you truly love to play with friends and family. People who've already bought the product are raving about how cute the game is and how much they love it. Leaving a review on Amazon, Pat N., a buyer, added: "I love this game of Monopoly...it is cute and fun and just a bit different than the standard Monopoly. If you love dogs you will love this game."

Lynn B. called the game a "fun spin on the classic" in a heavily detailed review. She wrote: "This game plays the same as the regular versions, with the real estate squares having dog breeds associated with them. Golden Retriever and Labrador Retriever are what Boardwalk and Park Place were in the original game. The utilities are dog services (dog washing and dog walking). The railroads are "best in show" awards. All the art is adorably cute, so much so that when you get a "go to jail" card, you don't mind because the picture on the card is so cute." Adding her final thoughts, she said: "It was fun to play - if you love classic monopoly you'll definitely get a kick out of this!" S. Stoessel also called it a very "good game" but had a word of warning for parents who were buying it for kids under 10. They added: "The only thing I would warn you about getting this is that this shouldn't be a first or only monopoly game for children under 10 or so. Instead of buying properties for good prices and location, it is judged by the breed of dog. It's better for kids who understand and have played a monopoly already. If it's for a first-timer, you should probably go for the classic monopoly."

For those looking for a cost-effective alternative to the game, there's "Late For The Sky Dogopoly" currently selling at $18.99 on the site. There's one for all the labrador lovers out there too called "Labopoly", available for $19.99.You can also go for a "Cats & Dogs" version of the game, which costs $18.