A research group found three males and fifteen females in the uncultivated garden of the Chez Madame Chabaud hotel in Mahajanga. 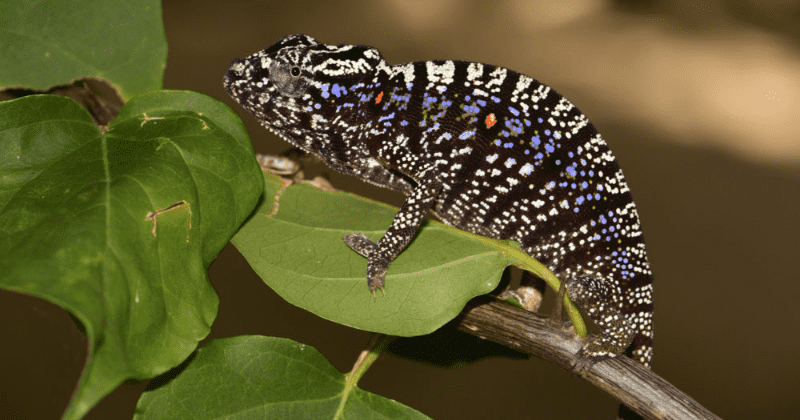 A group of researchers has found an elusive chameleon for the very first time in over 100 years. Equipped with flashlights, headlamps, and a whole lot of gear, a team of scientists in northwestern Madagascar finally came eye to eye with the Voeltzkow's chameleon for the first time in 106 years. The discovery occurred on the sixth day of their expedition and the animal was spotted in the unlikeliest of places—the uncultivated garden of the Chez Madame Chabaud hotel in a town called Mahajanga, reports The Times.

You come and go: Scientists say they have found an elusive chameleon species that was last spotted in Madagascar 100 years ago. Researchers say they've discovered several living specimens of Voeltzkow’s chameleon during an expedition. https://t.co/z8SXtmwDgS #odd

Expedition leader Frank Glaw was thrilled with the find. "It was a special mixture of great pleasure, excitement and relief," the head of the Department of Vertebrates at the Bavarian State Collection of Zoology, told Mongabay in an email communique. "And the good feeling of a happy end!" The team found a total of three males and 15 females all on the tree branches near the hotel. The crowning moment for the small group was when they noticed that the females could change into vibrant colors. "A female sleeping on a branch at night is not very colorful and relaxed females are largely green," Glaw added. "But if a female encounters a conspecific male or gets excited when handled by humans they quickly get a very contrasting pattern including black, white, and blue as predominant colors. The color change is probably most intense if the females carry fertilized eggs in their body."

This is a female Voeltzkow’s Chameleon. The species hasn't been seen by scientists since 1913.

The expedition took place way back in 2018 but the team has only just published its findings in Salamandra, a German scientific journal. The Voeltzkow's chameleon is compared to another species in the paper—the Labord's chameleon, which is considered to be its closest cousin as both are said to live for only a few months, and mainly during the rainy season. Their extremely short life span is the reason behind the elusiveness, a fact Glaw and the team readily acknowledge. "[Y]ou have to be in the right place at the right time to be able to detect these chameleons." The study is also urging that the chameleon be qualified to be added to the IUCN endangered species list of plants and animals.

FOUND: The Voeltzkow’s Chameleon had been lost to science since 1913...but no longer! An expedition team rediscovered the colorful species during an expedition in Madagascar. This is the 6th of our most wanted lost species found! https://t.co/7ZK2AGV6aY (Video: Frank Glaw) pic.twitter.com/wYqwN5UlX4

"Species not seen for many decades or even centuries … are likely to be seriously threatened with extinction," Glaw continued. "The earlier their threat status can be clarified, the better the chances to prevent their extinction by conservation measures. Luckily, F. voeltzkowi does not appear to be Critically Endangered since its distribution range is apparently relatively large (ca. 1.000 km2), but this rough estimate is in need of confirmation by future studies." As per the Global Wildlife Conservation's (GWC) 25 Most Wanted Lost Species, a total of six have been found so far, including the Voeltzkow's chameleon. Don Church, President of GWC and a Search for Lost Species program lead, added: "The Voeltzkow’s chameleon adds color and beauty to the planet, and reminds us that even when all seems lost, a great adventure can rekindle hope even for species we haven’t seen since Woodrow Wilson was [U.S.] president. Now we have so much to learn about this extraordinary reptile, including how we can best save it from extinction."

"In 1913, Voeltzkow’s chameleon (Furcifer voeltzkowi) disappeared from the wild, never to be seen in its native Madagascar again. But now, more than a century after it's been surprisingly rediscovered once more."