How gorgeous is this bird? 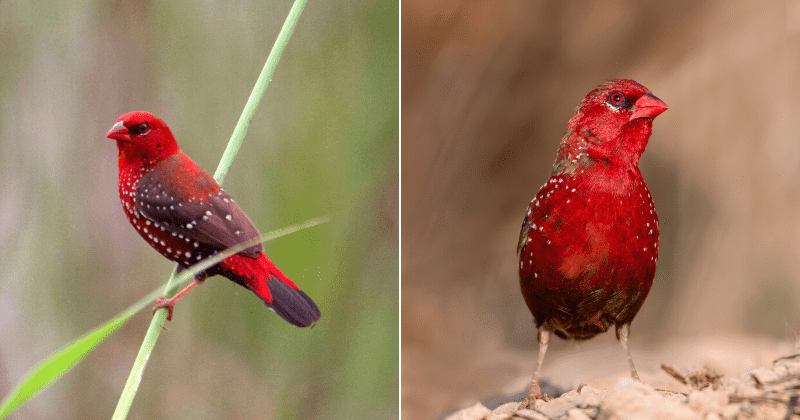 Isn't nature absolutely stunning? Birds, in particular, are nature's most beautiful works of art. With their range of colors and patterns, the results are almost always breathtaking. Unlike humans, the males among birds tend to be more attractive than their duller-looking counterparts. Nevertheless, the strawberry finch males, no different from humans, also make more of an effort to woo the ladies.

Roughly the size of a sparrow, the gorgeous bird is known as a red avadavat (Amandava amandava) or red munia. According to Bored Panda, males have a deep red crown on their back paired with white streaks under the eyes. Their tail, wings, and over-feathers are marked with white spots and their beaks are also red. Their plumage is similar to delicious-looking strawberries, hence the name strawberry finches. Of course, this look appears only during breeding season to attract the females. Once the deed is done, they reportedly go back to looking similar to females. The females of the species have a dark brown crown, back, and tail with much fewer white spots on their backs than males in the breeding season. Juvenile strawberry finches are less striking with a grayish-brown appearance all over.

Like other birds, the bright colors on the males during mating season is an important part of catching the female bird's eye. They also have their own mating dance—the male carries a grass stem or feather in his mouth. He then bows down with his feathers upright. These birds are often found in flocks of hundreds but when it comes to building nests they pair up with a partner. They typically breed in the second half of the rainy season and into the following dry season. They thrive in tropical temperatures, and when the weather gets cooler and drier they tend to lose their plumage.

The bright little birds are found in open fields and grasslands in tropical Asia. Unfortunately their colors not just attract females but also people who'd want to raise them as pets in cages. We think these birds like all birds belong to the skies. These beauties like to travel and can also be found in southern Spain, Brunei, Fiji, Egypt, Malaysia, Portugal, Puerto Rico, Singapore, and Hawaii. Wild strawberry finches can be found throughout Asia including Pakistan, India, Nepal, Sri Lanka, Bangladesh, Java, Cambodia; parts of Vietnam, Thailand, Indonesia, China. In the past, strawberry finches were sold abroad from the Indian city of Ahmedabad, from which the common name “avadavat” and species name “amandava” are derived. According to Avianweb - Beauty of Birds, their bird song is like a melody of tiny silver bells. The sound is said to be similar to that of a Weaver but it is more monotonous. Once again, only the males put in the hard work to sing. If you'd like to spot them in the wild, look into flat plains as they are usually seen in places with tall grasses or crops often near water.