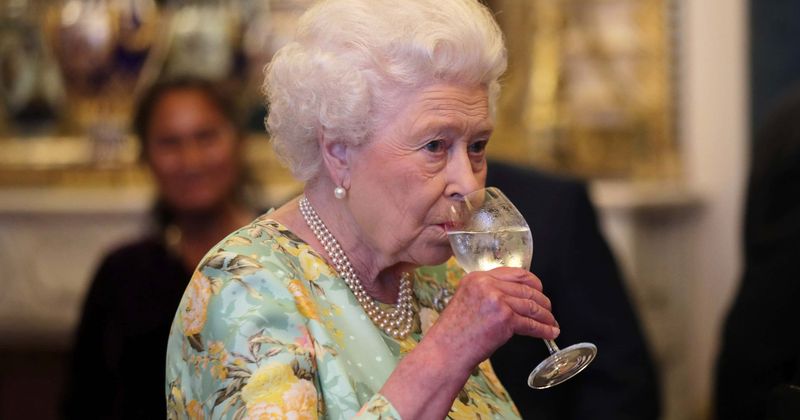 It appears that the Royal family knows how to live it up and celebrate good times. Queen Elizabeth has come out with gin made from plants grown at her holiday home just in time for the holidays! PEOPLE reports that Queen Elizabeth's Sandringham estate, the country home in Norfolk where the Her Royal Highness usually spends Christmas, has launched its own gin. The Queen reportedly enjoys a cocktail of gin and Dubonnet with a slice of lemon and a lot of ice just before lunch every day, says a former palace chef named Darren McGrady.  As for her new line of liquor, according to its website, the Sandringham Gin "includes Sharon fruit, a woody tree related to ebony, also known as the Chinese Persimmon and foliage from myrtle plants. The Sharon Fruit is grown in the Walled Garden on a sheltered wall at the end of what was a range of glasshouses, built on the winnings of the famous racehorse, Persimmon, owned by King Edward VII. The foliage from myrtle plants also grown on the Estate originated from a cutting taken from Princess Alexandra’s wedding bouquet on her marriage to Prince Albert Edward, who later became King Edward VII and Queen Alexandra." Alas, the liquor is only available in the U.K. The gin costs $67 (£ 50) a bottle is distilled in small batches, so orders can take up to two weeks for delivery.

But if you thought this was the first time the royalty rolled out alcohol, think again!  Buckingham Palace launched its very own gin with many of the ingredients come straight from the backyard of Queen Elizabeth's London home, this summer. The Buckingham Palace Gin has "a unique royal origin, with many of its citrus and herbal notes sourced from botanicals gathered in the Buckingham Palace Gardens. Lemon, verbena, hawthorn berries and mulberry leaves are among the 12 botanicals hand-picked for the gin in the Gardens at Buckingham Palace, which spans 16 hectares and provides a habitat for 30 species of bird and over 250 species of wild flower. For the perfect festive drink, the recommended serving method is to pour a measure of the gin into an ice-filled short tumbler before topping up with tonic and garnishing with a slice of lemon." According to the website, a bottle comes up to £40 which is about $54. That's not all, organic gin has been rolled out by Prince Charles on Highgrove Estate in Cornwall. The Queen's Balmoral estate in Scotland also distills its own single malt whisky.

Wow that sounds so yummy. Wish I could get it in the US.🍸

As for the Queen, we hear that the monarchy plans to celebrate her 70-year reign with four days of celebration in June 2022. That means the 94-year-old is not stepping down from the throne any time soon.  There have been speculations claiming that the British royal was planning to step down next year but those rumors have been laid to rest. Her eldest son Prince Charles, 72, is reportedly next in line to the throne, followed by his son Prince William, 38. According to Vanity Fair, Buckingham Palace’s culture secretary Oliver Dowden announced details of a four-day "blockbuster weekend of celebrations" to celebrate Her Majesty's 70-year reign in 2022.

A Buckingham Palace spokesman said, "The Platinum Jubilee offers an opportunity for the Queen to express her thanks for the support and loyalty Her Majesty has received throughout her reign. The Queen hopes that as many people as possible will have the opportunity to join the celebrations." The Queen’s biographer, Sally Bedell Smith, also stated, "Her Majesty will most assuredly not step down when she turns 95 in April 2021, although with the Platinum Jubilee to follow in 2022, she'll likely want to celebrate the birthday with minimum fuss. Unless she becomes incapacitated mentally or physically (which would trigger the Regency Act), she will remain Queen until her death."