Markle will not be able to wear any of the historic pieces such as diamond necklaces, brooches and tiaras. 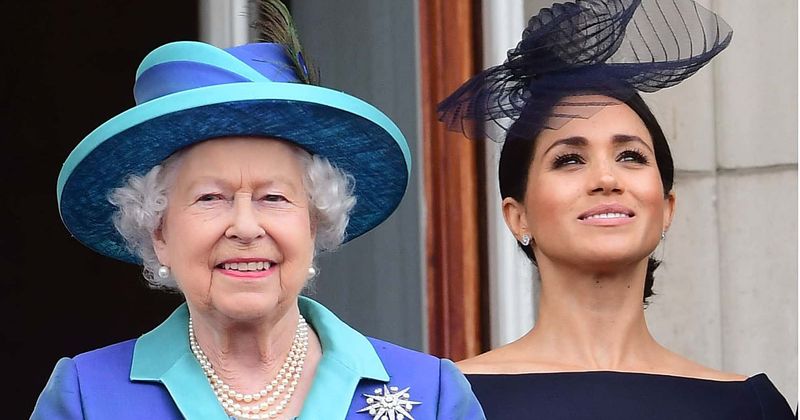 Meghan Markle will not be able to borrow any jewelry from the royal collection, according to royal sources. The Queen allegedly approved a ban that forbids the Duchess of Sussex from wearing any of the historic pieces such as diamond necklaces, brooches, and tiaras. The Sun reports that the ban was approved by The Queen and backed by Prince William. A royal insider revealed, "This is a surprising situation that has been going on behind the scenes over the past few months and has caused tension and upset, especially for Harry. It is at the discretion of the Queen and trusted advisers which items in the Royal Collection she chooses to loan out and to whom. Aspects of Meghan’s behavior, including before the Royal Wedding, caused resentment with forces within Buckingham Palace. To be perfectly honest, the Queen herself was not impressed with some of Meghan’s demands, especially as a new member of the family. As a result, Buckingham Palace has decided that not all items from the Queen’s royal collection will be opened up to Meghan."

So what exactly will Markle be missing out on? The royal collection includes the Queen Mary Fringe Tiara, which can also be worn as a necklace. It was made for Queen Mary in 1919.
The collection also includes pieces worn by Markle's late mother-in-law Princess Diana. One of Diana's signature tiaras was 'The Cambridge Lover's Knot Tiara' designed by Queen Mary. Kate Middleton has previously been spotted wearing the iconic tiara. Sources also pointed that the Queen's ban is not necessarily permanent and that Markle could be allowed to borrow items in the future, according to the Hull Daily Mail.

Princess Diana adored the Cambridge Lover’s Knot Tiara, and it has become one of the Duchess’s go-to tiaras, too. pic.twitter.com/S4ERvdHEU7

However, this isn't the first time that this has happened. Markle has missed out on royal jewelry previously. Kate Middleton's iconic engagement ring actually belonged to Prince Harry. It was passed onto him after his mother Princess Diana's death in 1997. But the young prince offered it to his brother William instead to give it to the woman he loved when William was getting married.  Former royal butler Paul Burrell said that Harry made a touching sacrifice by giving his brother a chance to use it instead. "Harry said to him: 'Wouldn’t it be fitting if she had mummy’s ring?' Then one day that ring will be sat on the throne of England. Harry gave up his precious treasure. His one thing he kept from his mother, he gave to his brother. That’s selfless, kind and exactly who Diana was," he said, as per Hull.

Markle not getting access to the royal family jewels is nothing to do with prejudices, but more to do with protocol.  The senior source added, "The Queen likes Meghan personally but this is about the hierarchy. She is showing that maintaining the correct order and precedence within the family is important. Even if Meghan is the most popular woman in the world, she is of a lower rank than Kate." Therefore reports that insinuate that Markle isn't allowed to borrow certain royal jewels because she's not important enough in the royal family is simply not true and are baseless.

According to the Express, a source said Prince Harry is pretty peeved about this arrangement. "There is anger that these claims circulating are simply not true," a source told the outlet. "They are rightly incensed." In fact, for the royal wedding, Meghan got to wear one of the queen's tiaras. Another royal insider added, "It is worth noting that the Queen lent Meghan a tiara for the wedding, gave her earrings for her first royal engagement, and had just agreed to partly fund her new household." The source added, "The jewelry in question is only usually worn at extremely special functions or state occasions and there simply haven't been many of those since Meghan became a member of the Royal Family."

Markle recently convened a special roundtable with young girls who are making an impact in their schools and communities, reports PEOPLE. The 39-year-old is also expecting a second child, a daughter, with Prince Harry. Perhaps, accessing royal jewelry is probably the least of her concerns at the moment.