Having made their in-store debut last fall, they were quickly snapped up by avid treat hunters even before being officially released nationwide. 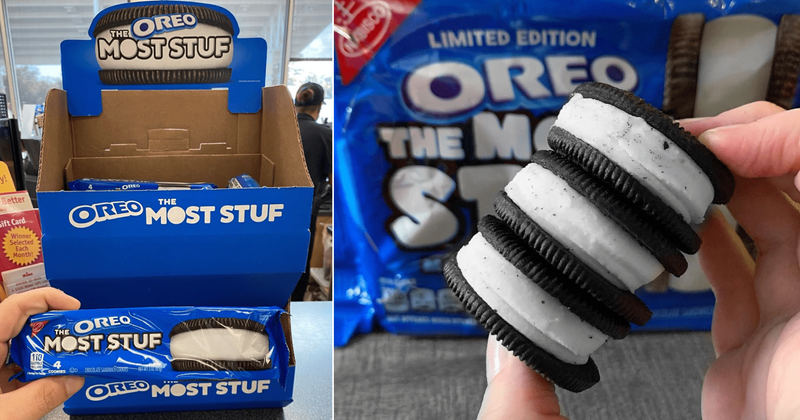 The Most Stuf Oreo sightings of 2019 have officially commenced and it couldn't have come any sooner. First introduced last year by Oreo's parent company Mondelez, The Most Stuf features three times the filling of a traditional Oreo and caused quite a divide among traditional Oreo-enthusiasts and those who believe more is sometimes better. Whichever side you choose to take, it is undeniable that the monstrous-looking cookies are quite popular and sought after. Having made their in-store debut last fall, they were quickly snapped up by avid treat hunters even before it was officially released nationwide.

According to TODAY, the Instagram account Cravings Hunter was one of the first people to spot the cookies at a Rite Aid in Long Island, New York in 2018 and the person behind the profile seemed quite happy with the extra creme. However, when Los Angeles-based source for snack food news, Munchie Bunchie tried The Most Stuf, they had to tap out after eating only a couple of the vanilla creme-filled treats. Speaking to TODAY, the account's creator revealed that they spotted the product at a Target in West Hollywood, California, and at a Rite Aid in Beverly Hills.

Meanwhile, another Instagrammer, Snackstalker, reportedly had to hunt through seven or eight East Coast Rite Aids before finally finding the gluttonous treat on shelves. Although it was initially intended as a limited-edition release, due to popular demand, an Oreo spokesperson confirmed earlier this year that The Most Stuf will indeed be back in the coming months. "We know you are passionate about your stuf. Excited to confirm that, once again, our stuf-loving fans will be able to pick up Most Stuf Oreo cookies in stores this winter!" they announced.

The rep added that "there will be even MORE (stuf) to share soon, so stay tuned," but did not elaborate further. Although the company is yet to announce an official return date for the treat, the Instagram account JunkPickers spotted glorious, creme-filled delights in four-packs at a local Wawa earlier this month. Other social media users commented in the post that they too saw some at their local 7-Elevens and Walmarts.

While the return of The Most Stuf Oreo is undoubtedly a welcome holiday gift, it once again gives way to the debate of whether one cookie can contain too much creme. While some argue that the original Oreo has the perfect ratio of crunchy cookie to creamy creme, creme-enthusiasts counter that less doesn't necessarily more when talking about the perfect bite. Although the giant stuffed cookie may seem pretty over-the-top to some, it certainly isn't Oreo's most outlandish creations. Remember the limited-edition cookie with birthday cake-flavored creme, Oreo released in honor of Mickey Mouse’s 90th birthday? Whether you're team "give me all the creme you have" or team "keep it light," you've got to admit, Oreo is definitely giving you your money's worth.