Minimalist jewelry lovers will notice and adore the fact that it got a subtle makeover. 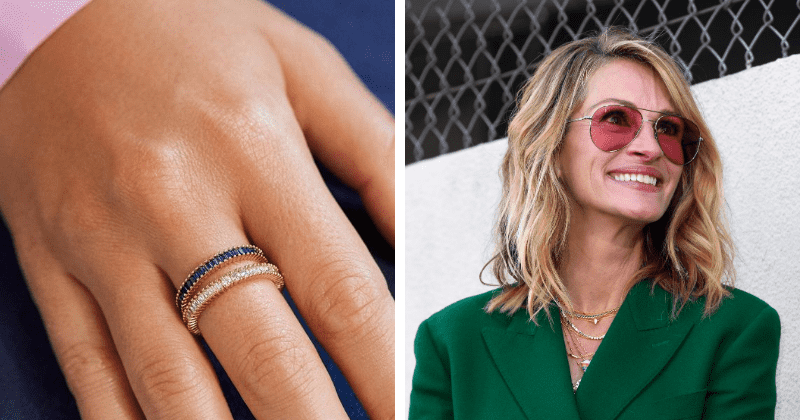 Sometime last April, Julia Roberts walked onto the Hollywood Walk of Fame red carpet in support her friend Rita Wilson, who had received the 2,659th star on the boulevard. On this occasion, Roberts wore the most exquisite emerald green Salvatore Ferragamo suit and $695 Sophia Webster booties. The outfit's rich green color and accompanying rainbow heel detailing made the fashion world go nuts. However, it was a tinier object that stole the show. People could not stop talking about the gorgeous multi-colored ring on her finger. Later on, it was revealed that the ring was worth a remarkable $44 and could be found at everyone's favorite affordable jewelry brand, BaubleBar.

It was on March 29, 2019 that Wilson received her star, positioned only four stars away from her legendary husband and fellow Walk of Famer Tom Hanks. Roberts, who was elated for her long-time friend, gushed on the occasion, “Rita is truly one in a million."

“So we all know how warranted it is that Rita Wilson be immortalized here in a star on the Hollywood Walk of Fame in front of this world-famous hotel and parking structure in a sight that will forever be right over there,” Hanks had said at that time, pointing at her newly minted star on Hollywood Boulevard.

The ring Roberts wore - the Alidia ring - is one of the brand's best selling pieces, People Magazine reported. Even prior to the actress wearing this, the colorful baguette band had struck a chord with people. The ring sold out within three days of its launch. It's the style of the ring that makes it so sought-after and the brand, fittingly enough, has decided to release another version of it. That's right, this time, it's more dainty, and an understated version of the same ring that Roberts wore that day. It's going to be available for purchase soon and minimalist jewelry lovers are surely going to lose their minds.

You will find that the Micro Alidia has all the fan-favorite features that the OG option had. To start with, the signature baguette stones are visible with lots of sparkle. The ring is centered on a gold-plated base and comes with the same $44 price tag. The difference is that it's much smaller than the original, and even smaller than the mini Alidia version. This makes it really convenient for stacking or for those who prefer a dash of sparkle on their fingers. The Micro Alidia Ring is available in two styles: the traditional baguette that BaubleBar shoppers have come to know and love, and a mixed style that boasts half baguette stones and half round stones.

Similar to the two versions of the Alidia that came before it, the Alidia Micro Ring is also expected to be sold out at the earliest. The demand for this product has been incredibly high, especially since Roberts wore the OG Alidia ring on the red carpet. You can find petite versions of the ring at the brand's official website for $44. "Meet the Mini Alidia Ring! The slimmed down version of our best-selling Alidia Ring comes in a variety of can't miss colors so you can mix, match and stack your own unique combination," the company writes in their description. BaubleBar released the Mini Alidia Ring in two new colors: a deep black and crystal clear. The slimmed-down gold-plated ring features small glass and resin baguette-shaped stones that resemble its big sister.

To see which finger you want to wear it on, you should check out BaubleBar's fit guide. This will help you for the most accurate sizing, as they’ve been known to run small. No matter what else you choose to wear, the statement ring Mini-Alidia will undoubtedly add a little dazzle to any outfit.