A teacher from Katy ISD lands in trouble after reportedly crossing the line and telling a student that there is no God. 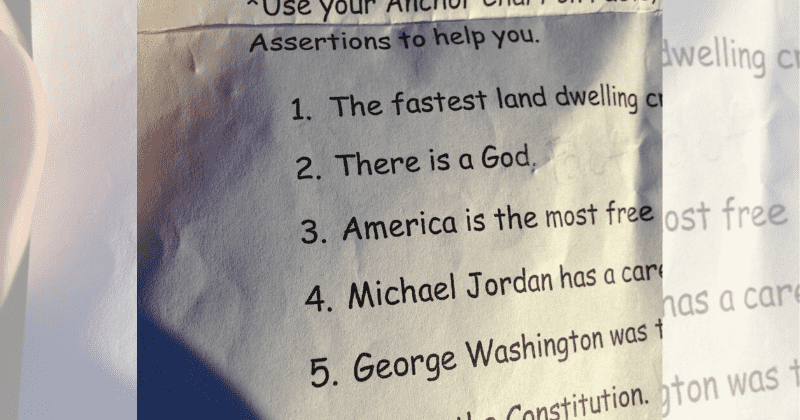 The discussion of the existence of God is similar to opening a pandora's box. While some are staunch believers, others are vehement deniers and chalk it up to being a fantasy. Then there are those that are perpetually on the fence as to where they belong. For a large part of humanity's existence, these three groups have managed to co-exist relatively peacefully. However, when one ideology infringes on the beliefs of the other, it paves way for a major confrontation. This is what happened with Texas school teacher who told her students that there is no God and one feisty seventh-grader took offense to that. The incident occurred in a Katy Independent School District where the teacher gave the students an assignment that contained a question "Is there a God" followed by three options–"fact, opinion, or commonplace assertion."

This was part of graded assignment and #katy middle schooler says she was told she had to say God wasn't real #khou pic.twitter.com/5EQ5EnSYi7

A student, Jordan Wooley, answered the question by selecting two of the available options—fact and opinion. To her surprise, the teacher refuted her answer and instead said there is no God, and thereby crossed a line in the girl's eyes. Explaining the situation to USA Today, the girl was quoted saying:"I said it was fact or opinion,"  adding she answered that way because "based on my religion and based on what I think and believe, I do not think it was a common place assertion. She told us it was wrong and a myth of our imagination that is commonly believed to be true but completely wrong," Wooley said. "For her to tell me my religion was wrong shocked me. To me, there is a God. It was really confusing to me at first because I didn't really know what to do, so the first thing I did was tell my mom," Jordan said.

@nonymoose @JoshChapinKHOU @KHOU
No his was a teacher pushing an agenda... & should be fired!

Enraged the incident, her mom, Chantel Wooley, said: "I think that the teacher crossed a serious line when she led impressionable minds to write there was no God...that God wasn't real. I think that infringes on my child's rights. That a kid was literally graded against her faith in God in a classroom. So the kids were caught in a Catch-22. If they argued their faith, they were being told they were arguing against their faith and that happened in the classroom," the mom said. She opined that she could understand the assignment if it were given in college. "Are we talking about impressionable 12- or 13-year-olds or are we talking about 24-year-olds in college who already have a firm grasp of the world around them?"

@JoshChapinKHOU @KHOU I believe the answer the teacher was looking for here is "opinion". Which, imho, is the correct way to answer that ?..

The mom and daughter duo then proceeded to file an official plaint with the school claiming their religious freedom were being infringed upon. In a meeting organized by the school authority, Wooley took the front to speak. "Today I was given an assignment in school that questioned my faith," the girl said at the meeting. The school district issued a statement regarding the whole ordeal and said that it determined "the activity, which was intended to encourage critical thinking skills and dialogue by engaging students in an exercise wherein they identified statements as fact, opinion, or common assertion was not intended to question or challenge any student's religious beliefs as reported by some media outlets. Still, this does not excuse the fact that this ungraded activity was ill-conceived and because of that, its intent had been misconstrued," the district continued.

@CasperAS14 @machotaco @JoshChapinKHOU 'There is a God' is a great example of a common assertion.The response is a shame, though predictable

As per the statement, the teacher is reportedly distraught by this incident, as various comments have gone on to vilify her actions without understanding the context behind the exercise the fact that she was of a Christian faith. The backlash has also prompted to remove the exercise from the activity list altogether.

@JoshChapinKHOU The assignment looks to be more about critical thinking than anti-religion or anti-God.