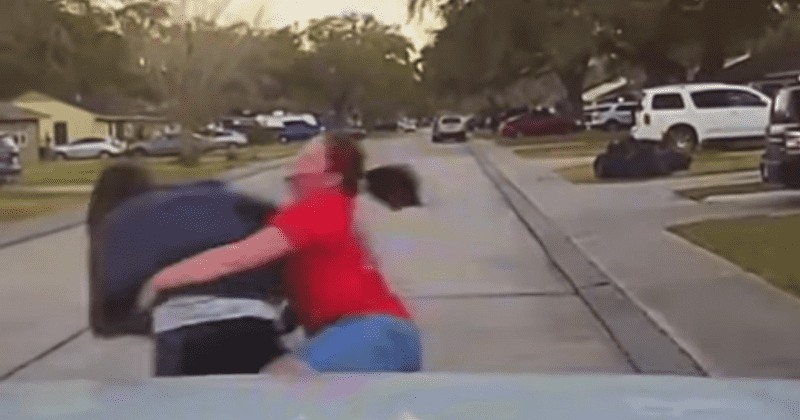 It's not every day that a mother is adored by the internet and the police for a perfect tackle that would make any NFL coach or linebacker proud. But that's what Texas mom, Phyllis Pena is being hailed for. The incredible tackle did not take place on a football field but outside her house in Lake Jackson. On the morning of January 31, she had just come back from a store when she noticed a peeping tom looking inside her teen daughter's room. Her 15-year-old was not in the room at the time. Lake Jackson Police dash cams captured the exact moment Pena set herself up like a pro to tackle the culprit, a 19-year-old boy. As he ran towards the street, Pena made her way slowly towards the boy and within moments took him down like it was no big deal.

The clip has since gone viral with netizens hilariously demanding that she get a call from some football teams. "First instinct was just to make sure he didn’t go any further," Pena told Click2Houston. The clip also showed Pena being helped by her daughter to hold the boy down until officers caught up. Pena had called the police when she saw the boy later identified as Zane Hawkins outside her house. When they arrived, Hawkins tried to flee in a state of panic. Little did he know what was going to happen next. Pena's kids knew of Hawkins but not personally. He now faces charges of possession of a controlled substance, evading arrest, and resisting arrest, according to Sgt. Roy Welch. More charges could be added, he said further. Hawkins is now cooling his heels in jail.

She definitely coulda played for the Vikings when they were playing their 3rd and 4th stringers last season. At least she knows how to wrap up!

"It’s not very often that we have somebody that actually steps in, puts themself in harm’s way to assist in apprehending somebody," said Welch. Pena added, "My kids are my life and just making sure I protect them." And the cops present in the scene could not help admire what Pena had just done. She recalled as one of them told her, "Hey, so I heard the Texans are looking for a new linebacker," as he "fist-bumped" Pena. Unsurprisingly, netizens echoed the cop's sentiment, too. Twitter user Rose104Blue wrote: With the 26th pick in the 2021 NFL Draft, the Cleveland Browns select Phyllis Pena, LB. DaveWronkowski commended Pena's technique and noted: WHAT A TAKEDOWN! Kept feet movin, quick strafe, cut off the cut back lane, absorbed the initial blow —

Mom with the Perfect Tackle of peeping tom.
Every coach should use this video as how to make an open field tackle
Well done Phyllis Pena!@espn, have her present the @NFL award for best defensive player. Perhaps sign her for weekly award spot. #PerfectTackle #MomTackle Goodell https://t.co/YJJU5sCjn2

He added: let her ponytail fly and drove him to the ground. #FootballMom. Outkick wrote: The Chiefs could've used Texas mom Phyllis Pena during the Super Bowl. Watch Phyllis drop the hammer on a peeping Tom as he tries to hit the open field. On Facebook, Shawn Pyett commented: Wow!!! Somebody get her a sports agent, Never mess with a Mom.... especially when it relates to their children.... what a tackle, there’s some football teams that could use someone with that tackling talent. Good job Mom. . I’m glad your child is safe.  Allie Wright Metoyer, a mother herself, added: Best Mom Every She deserves a Medal of Honor’We need more mom’s like her: I would have tried to run over him with my car: She is MOM of the YEAR for protecting her daughter; I would have done the same R he would be DEAD. Tremaile Prelow commented: The cowboys need to sign her right now smh we need her

Leverage was a little high, great job getting her head out of the tackle, textbook same shoulder same foot