"When I have to do medical stuff I can look up at the pink house and it kind of calms me down a little bit," he said. 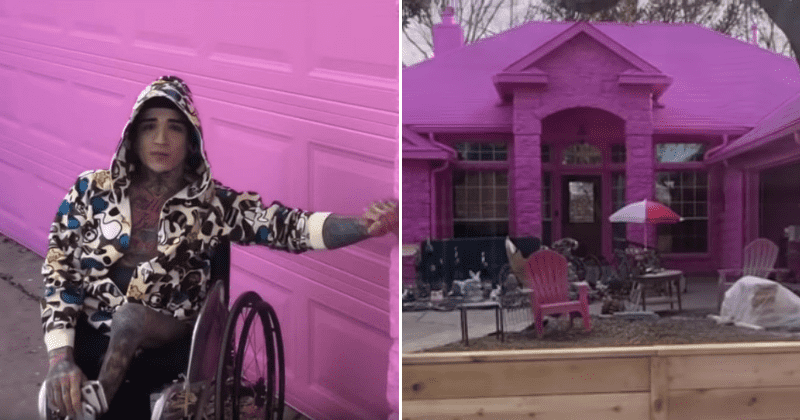 A Texas man is living his best life at the risk of antagonizing his neighbors and he simply doesn't seem to care. Emilio Rodriguez of Pflugerville, Texas has always had a grand vision for his house —he wanted everything in his house to be pink. So he painted every possible surface of his home in bright pink because it brings a strange comfort to him. But his neighbors in the Mountain View aren't his fans and they simply can't stand the eyesore of a structure in their neighborhood, KTBC reports. Many neighbors feel the color doesn't go with the overall vibe of the locality but they can't do much besides file a lawsuit which isn't likely to yield any result.

Rodriguez though doesn't care. "No HOA. I pre-planned this specifically because of that reason, so when people get mad I explain there is no HOA here," he told CBS Austin. "Even if they made an HOA right here I'm already grandfathered in so we're set. I did my homework beforehand." He planned the paint job in mid-January 2019 after he moved in here to the Creekside subdivision near Dessau Road and Wells Branch Parkway with his girlfriend two months earlier, per Statesman. Except for the kitchen cabinets Rodriguez painted everything from the roof to the gutters in pink even though his girlfriend and family advised him against it.

How would you feel about a bright pink house like this popping up in your neighborhood? People in this Texas subdivision hate it so much that they're filing a lawsuit. But the homeowner calls it his "dream home". Would you care if this was next door to you? pic.twitter.com/rthBtaHJMP

"I did the back first, the whole back of the house, then I did the whole house," he said. His inspiration came from a tattoo on his left forearm which features a pink tongue sticking out of the mouth of a skull. His project is nowhere near complete, and he has grander plans ahead. "The driveway [is] going to be pink, I'm getting all the grass removed for pink tile blocks, I'm going to have pink spotlights on the trees, [and a] pink car. I will paint my wheelchair pink," he added. "People say it looks like Pepto--Bismol but I'm going for pink slime," Rodriguez continued. "I (chose) literally a Pepto-Bismol paint; if you feel me, I wanted a slime pink. A wet slime — it looks like a liquid — that's what I was going for, like a liquidy slime ooze pink. It kind of sounds like Pepto-Bismol, if you think about it."

A Pflugerville man said he paid nearly $40,000 to $50,000 to have his house painted pink. What do you think of his pink house? STORY: https://t.co/nf2Iv12SGM #Pink #House #Pflugerville #Texas pic.twitter.com/qUJhdv5kQK

His choice drew some ridicule from a lot of people, especially on social media, where thousands of people threatened him and posted hateful comments but he didn't budge. The professional video gamer and artist had a horrible car accident that left him paralyzed from the waist down since he was four years old and has since undergone dozens of surgeries. But, nothing brings him the comfort that the color pink does. "When I have to do medical stuff I can look up at the pink house and it kind of calms me down a little bit," he shared. So far, he has spent over $10,000 on the pink project and wants to pass it on to family members under a clause that it will forever remain pink.

The @KATVNews Daybreak story on this pink house in Texas prompted our team to talk Pepto-Bismol song (yeah, THAT one), John Mellencamp, Cadillacs, and Steel Magnolias! You got anything else? @KATVChris @KATVAlyson pic.twitter.com/h0devetBYN

Asked what other investments he's planning for the house, he adds: "How much am I going to invest... in this house? Man, I don't have a problem; I don't even know, to be honest. There's no limit. There's no budget. Put no budget. That's what I'm telling people right now. I'm serious about that," Rodriguez said. "I love this house. I don't know why people don't like it." Anita Garcia, a neighbor showed her support to Rodriguez even as many slated his choices, after visiting the house because her curiosity got the better of her. "Beetle Juice movie or maybe Edward Scissor Hands just really different. To each his own... but yeah I wanted to see it for myself it was real."