trending celebrity people lifestyle news animals
Cop Throws Autistic Teen On Ground & Brutally Punches Him. "No child deserves to be treated like this"

Cop Throws Autistic Teen On Ground & Brutally Punches Him. "No child deserves to be treated like this"

The 17-year-old's father shared the clips on his Facebook page and asked people to make them viral. 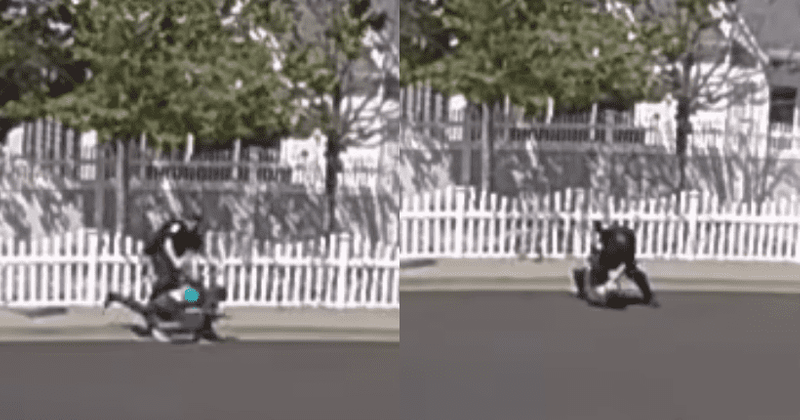 Trigger Warning: The story has details of assault and police excess that readers will find disturbing

A police officer in California was seen punching an autistic teen after throwing him to the ground in clips that were shared by the teen's father. The clips, taken from a doorbell camera, were posted on the child's father, Adam Wolf's Facebook page where he asked people to help him make it go viral. "To All my Friends and Family, I need your help," wrote Wolf. He recounted the incident that took place on April 21 around 2.30 pm near his house on Vacaville. According to him, his 17-year-old son, Preston, was "aggressively approached" by a Vacaville police officer who "screamed at him to sit down which he did." Wolf added, "The officer then moved Aggressively toward my son, threw his scooter and got in his face." The clips show the officer flinging the scooter several feet away.

"My son became fearful, as would any child with Autism. The officer went to touch Preston, at which point Preston moves away. At this point, Preston was confused and afraid and moves away from the officer even more. At that point the officer felt it was a good idea to THROW Preston to the ground. Once on the ground, the officer climbed on top of Preston and PUNCHED him in the face," wrote Wolf. "You punched me in the f***ing head," the teen is heard yelling at the officer in the video. The cop is seen radioing for help as he struggles with the teen. "You're gonna get hurt. Don't make me hurt you more. Don't make me hurt you more," the officer tells the kid. A few seconds later, two more police officers arrive at the scene. Wolf added that there were "multiple neighbors" who witnessed the incident. Preston is seen yelling at the officer to "call his parents" in the video.

California cop caught on camera throwing autistic teen to ground, punching him in face after he ran

The boy's father said his son was confused and afraid. The Vacaville Police Department said the boy and an unidentified 16-year-old got into a fight.https://t.co/fMn4fFm9AZ

"I don't believe that Preston will ever trust a police officer again. I am pro-police, but I am not pro ABUSE! This individual and department must be held accountable for their actions," stated Wolf. Besides autism, Preston also has ADHD and "looks and acts younger than he is", according to his father.  "NO child, disability or not, deserves to be treated like this...Please make this go viral," Wolf concluded. Ian Schmutzler, the Vacaville Police Department Acting Chief, told CBS in a statement they are investigating the case.

This is horrendous. The department needs to be closed down and replaced.

According to Schmutzler, despite claims in the media, the officer was unaware of the child's autism. "We are scouring the dispatch recordings, body-worn camera video, ring camera video and any other visual or audio evidence we can find," Schmutzler said. He added that a police team had gone to the teen's residence to speak to him and the family to "understand what happened." He added, "Any time there is a use of force, it is difficult to watch. Uses of force are taken seriously by the department and all use of force incidents are reviewed by the supervisor, the watch commander, and a use of force review committee. I want to assure you that I do NOT take this circumstance lightly and that I am dedicated to doing all I can to ensure accountability and transparency as we examine ALL aspects of this incident."

Speaking with KTXl, Wolf said another teen had picked a fight with his son while he was playing at a creek nearby. Preston apparently picked up a metal rod to defend himself until an adult intervened. The police were then called. By then, Preston had gone to play with another child. That's when the officer arrived and the entire episode was caught on video. After the assault, Preston was detained for an hour while still bruised.