Chase Smith has been battling cancer since the age of 12 but new tumors were found in his skull and he was told he has two to five months left. 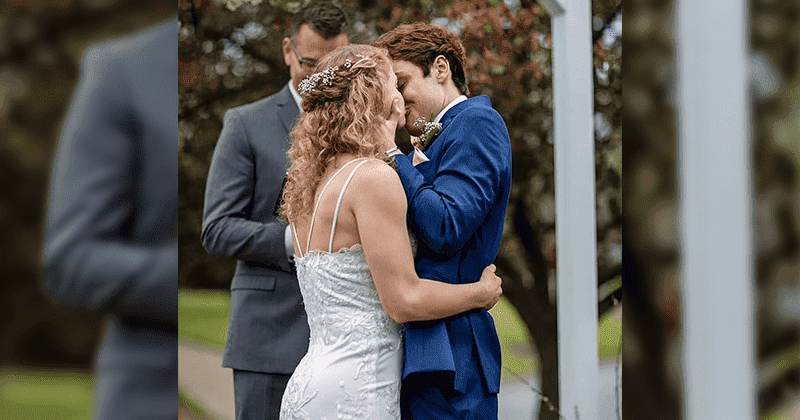 This story is reminiscent of a Nicholas Sparks novel. It will break your heart, make you cry, and then make you wish for a miracle to intervene. Chase Smith learnt that he had only a few months to live after his cancer was back. He had been battling cancer since the age of 12  when he was diagnosed with Ewing’s sarcoma. Throughout his teenage years, he kept fighting cancer and winning. But this time it would be different. When the symptoms came back this March, doctors found several tumors inside his skull and said Chase has about three to five months to live, reported WFLA.

That is when he decided to marry his high school girlfriend, Sadie Mills. The two 18-year-olds met at a swim meet during their senior years of high school. There, they exchanged numbers and began talking. A few days later, they went on their first date. Chase parked his truck in Sadie's driveway to pick her up for their first date, which was where they had their first kiss as well, at the end of the date. At the time, the possibilities were endless and the two youngsters had their whole life ahead of them. Getting married was a part of their long-term plan. Sadie would go to IUPUI for college and continue her swimming career and Chase who was once a nationally-ranked swimmer would also be there her side, hopefully in the water, too. They decided that they would marry after college.

But this plan was sped up by a few years when after six months of them dating, they were exchanging their wedding vows at the same spot on the driveway where they shared their first kiss. After all, they were running out of time. IndyStar reported that, as Chase watched Sadie come toward him in her simple white dress, he shook his head, smiled, and then started crying. They referred to their quick decision to tie the knot as a "God moment." They wanted to take this devastating news as an opportunity to express their love for each other as well as their faith in God. So they gathered their families for dinner one day and asked for their blessing.

"I told them how much Sadie had changed my life and how much I loved her, how special she had been to me, the simple fact that there is nobody I’ve been able to open up about my personal life and cancer journey like I’m able to with her," Chase said. "She is able to calm me down in a lot of scenarios when nobody else can." Chase's mother likened their love as a Hallmark love story and said, "you just don’t see love like this." The families were moved to tears with the maturity and love the two lovebirds had. They gave them their support and the wedding was planned in four days, through tears and laughs.

"He was so sweet. He’s very polite. He’s a good Christian boy," Sadie said of her first impressions of Chase. "We just fell in love with each other’s personalities. Now, he is all that matters to me." She went on to say, "We, every day, pray for a miracle together because we trust in God. We pray that Chase would stay on this earth longer so we can bring more people our story of love." One of their wedding vows was to spend every moment they have left together and another was to put all their faith in God, now, more than ever. They have even launched a GoFundMe page to help raise funds for Chase's treatment.

"The most important thing in my world at this point is spending time loving and laughing. Just living life to the fullest and loving every moment," Chase stated. "The precious people in your life, the amount of time they are in your life, take every moment you have. Enjoy and give everything you can in those relationships. And know there is so much possible with love when your love includes God."