trending celebrity people lifestyle news animals
Tearing Down Statues Doesn't Erase History, It Makes Us More Aware Of It, And It's Not A Bad Thing

Tearing Down Statues Doesn't Erase History, It Makes Us More Aware Of It, And It's Not A Bad Thing

America was built on the exploitation of minorities by white people and that isn't anything to be celebrated. 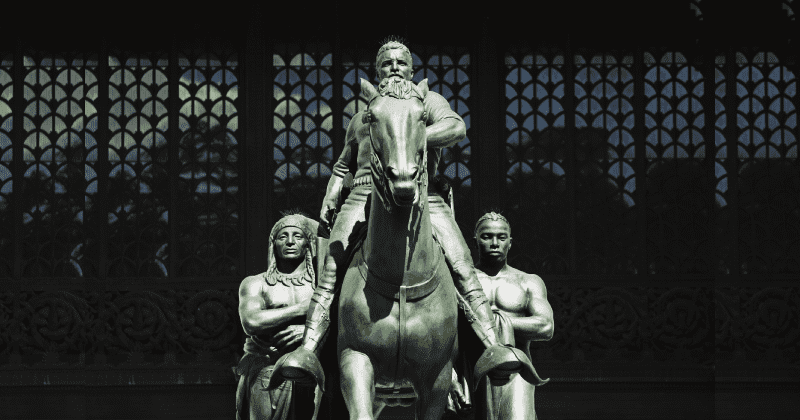 Toppling statues of problematic historical figures have opened debate on what it signifies to take down a statue. Does it mean erasing history? As has been the argument by those opposing the idea of tearing down statues, or does it mean coming to terms with the past? Black Lives Matter protestors have targeted statues and monuments of people with a racist past, a majority of them being slave traders or owners. While there has been long-held resentment towards slavery among minorities, most accepted and maintained the status quo of statues of problematic figures until protests broke out in the wake of George Floyd's death. The protestors called for rooting out police brutality against the African American community and racial inequality. Some of the statues taken down include George Washington, Jefferson Davis, and Christopher Columbus.

Protesters in Portland lit a US flag on fire and draped it around a George Washington Statue they later pulled down.

On the side of the fallen statue they scrawled “1619” which is the name of the New York Times project to cancel 1776 as America’s founding pic.twitter.com/eY4BmPw2Ie

What does a statue represent?
A statue is never about the figure itself, but the idea it depicts, much like how the Statue of Liberty represents the expression of American liberty. To analyze what tearing down a statue means is to also analyze what an installed statue signifies. It's no secret that history is written by victors. In a story about white people colonizing the land of Native Americans and using the slave labor of the Black population to build a country, white people were always going to play the role of the protagonist. Many of the figures whose statues figure prominently in our streets, profited heavily off the exploitation of minorities. For the oppressed, every statue that remains upright is a reminder of a society that celebrates their oppressor. Every statue represents what society values and celebrates.

America's chequered past
For America, accepting the demolition of statues also means acknowledging its troubled past. White supremacy featured heavily in the making of this country, but history has whitewashed the crimes of the colonizers involved, to paint a pretty picture. America likes to portray itself as a champion of democracy, human rights, and freedom but its dark past refuses to agree with much of what it wants to portray. White supremacy is still celebrated in this country and one only needs to go to a Donald Trump rally to experience it first hand.

Confederate statues
The Confederacy was a government of 11 Southern states that seceded from the Union in 1860–61 for refusing to comply with the government's call to end slavery. The Confederacy committed treason to form a separate government within the Union. The Law of Treason notes that "States have no power to form a Confederacy within the Union composed of any of its States," according to The New York Times. Why then is the Confederacy celebrated? Why wasn't a treason trial held against the then Confederate president Jefferson Davis? Why did President Andrew Johnson pardon former Confederates from the crime of treason in 1868? The Confederate government lasted merely five years but continues to be celebrated because it represents white supremacy. The flags of the confederate state are a staple at Trump rallies and Republican conventions, and it's yet another reminder that white supremacy is what many still aspire for, in America.

Erasing history?
The argument that tearing down statues amounts to erasing history doesn't hold water. We don't learn history from statues but through education, first-hand accounts, and other similar documentation. Germany serves as a perfect example of this. There's no statue celebrating Hitler in Germany and yet there's hardly any debate as to whether he's the worst human being in modern history. We can teach history and contextualize important personalities without amplifying just their 'achievements.' We can accept that Thomas Jefferson who wrote the Declaration of Independence also raped an enslaved Black woman and refused to free the children he fathered with her until he died. We can accept that Andrew Jackson was a US President and that he owned slaves and ethnically cleansed Native American people. Thanks to attempts to take down the statues, now an entire generation knows more about the problematic past of the likes of Washington, Jefferson, and Robert E. Lee. If anything, we've become more aware of history.

Destruction of a statue
Tearing down a statue symbolizes a refusal to celebrate what it represents. White supremacy is publicly condemned in America today but the systems put in place over centuries continue to be rigged against the minorities. Racial inequality and police brutality stem from a refusal to accept African Americans as equals. America represents a duality. On one hand, it's a country that wants to be celebrated for the progress it has made, even if it came at the cost of exploitation of minorities, and on the other, it's a country that wants to acknowledge its past but can't do so without disowning its progress. The likes of George Washington and Chris Columbus played key roles in shaping America for what it is today, for good or bad, but so did the exploitation of the Black community and Native Americans. The least America can do is to not celebrate those that oppressed the minorities. Protestors are tearing down statues of figures who indulged in the slave trade and oppressed and killed minorities, and it's time for America to let them because this is history in the making.

Disclaimer : The views expressed in this article belong to the writer and are not necessarily shared by shared.com