trending celebrity people lifestyle news animals
Statues of 'White' Jesus Are A 'Form Of White Supremacy,' Should Be Torn Down, Says Shaun King

Statues of 'White' Jesus Are A 'Form Of White Supremacy,' Should Be Torn Down, Says Shaun King

He accused white people of using Christianity as a tool of oppression and called 'White Jesus' racist propaganda. 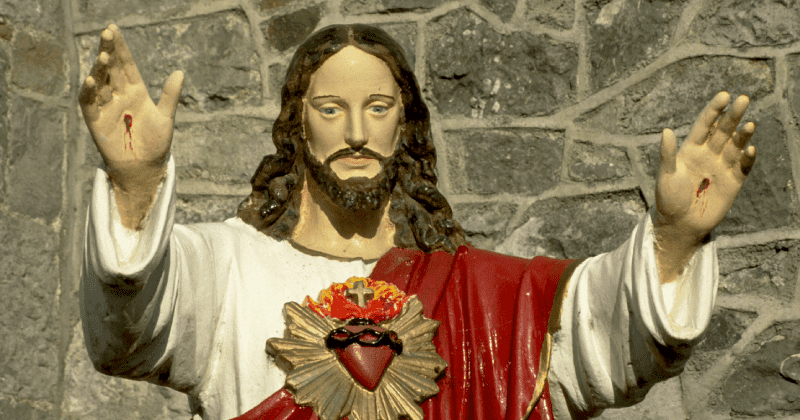 After a host of statues of figures of slave traders and colonizers were torn down across America, there have been calls to tear down statues of 'white' Jesus. Shaun King, who views himself as a left-leaning activist, said that images depicting Jesus as a “white European” should be removed as they reflect and impose the idea of white supremacy. King made the comments on Twitter. "Yes, I think the statues of the white European they claim is Jesus should also come down. They are a form of white supremacy. Always have been," said King, keen to remind America that Jesus was never white as he has been made out to be over the years. "In the Bible, when the family of Jesus wanted to hide, and blend in, guess where they went? EGYPT! Not Denmark. Tear them down," said King, reported Fox News.

King was weighing in after statues of problematic figures were torn down all over America. Slave traders George Washington, and Christopher Columbus were some of the few that were torn down in America. King said, "White Jesus is a lie" and claimed such images and statues are a "tool of white supremacy" which enabled white people to use Christianity as a “tool of oppression. He shared an image of a brown man created by forensic anthropologist Richard Neave, and said white Americans appropriated Jesus as a white man so they didn't have to confront the thought of their God being a brown man, especially after they "sold, traded, raped, and worked Africans to death, for hundreds of years in this country." King called for the removal of “murals and stained glass windows of white Jesus, and his European mother, and their white friends.” He labeled them as racist propaganda. "They should all come down," he added.

Experts have long since said this is likely the most accurate depiction of Jesus.

White Americans who bought, sold, traded, raped, and worked Africans to death, for hundreds of years in this country, simply could not have THIS man at the center of their faith. pic.twitter.com/Mn1pOCR233

Richard Neave had created the image to represent a Galilean man for a BBC documentary, Son of God. He used an actual skull found in the region. Neave never claimed the image to be that of Jesus but created it to represent a generic face of the time period, considering Jesus was not known to have any distinct features, reported BBC. Different cultures have their own version of Jesus with Ethiopia depicting Jesus as a Black man for more than 1,500 years while Jesus has been pictured as Asian in some parts of the continent.

This is a moment for everyone who says they follow Christ to connect to or strengthen our connection to the love, teachings and example of Christ.

While Shaun King likes to portray himself as a champion of the Black Lives Matter, he has been called out multiple times for appropriating left-aligned causes to fund his own ventures. It was his tweet with the video of Ahmaud Arbery being shot that proved to be the catalyst for Georgia law enforcement to arrest the killers, reported The Daily Beast. While he helped propel the cause, his personal interactions with Black women have been problematic. "Shaun King is a terror. For far too long, he’s used bloodied Black bodies for retweets and calls it “information,” he’s targeted journalists and young Black women attempting to him accountable. This is a disgrace," said Preston D. Mitchum, a write and Adjunct Faculty at Georgetown University.

King used his platform and support among progressive supporters to fund the North Star, an ambitious media house project. Almost two years later, the project never really took off. A Twitter trend #ShaunKingLetMeDown comprised of threads by many of his former staffers, investors, and colleagues and detailed issues with the many projects, and he often started and abandoned, often providing little information on the money raised for those projects.

Last week, on the eve of Juneteenth, a group of protestors pulled down a George Washington statue in Portland, Oregon. "Genocidal colonist" was spray-painted on the statue. Washington, the first US President traded enslaved people and refused to free the Black people he owned until his wife's death. Earlier this month, Christopher Columbus' statue in Virginia was torn down and dumped in a lake. Videos and photos show people dragging the statue and dropping it into the lake. One placard placed at the feet of the statue during the protests read: Columbus represents genocide.