The elementary school teacher allegedly told them that they weren't welcome in the neighborhood and even threatened to call the police. 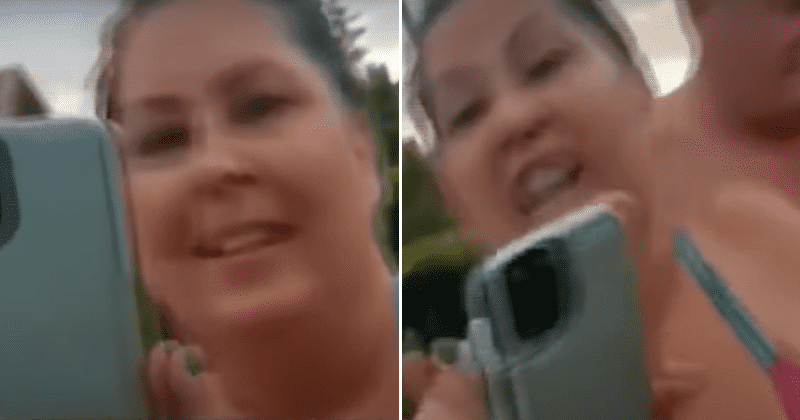 An elementary school teacher lost control of herself during a peaceful protest at Bakersfield, California, and began to scream vile profanities at a mother and daughter. Carrie Maxwell is a teacher at Wayside Elementary School for Bakersfield City School District and was recently caught on video yelling at a mother and her eight-year-old daughter, NY Post reports.

Erika Baze said that she and her daughter were just heading from the protest when Maxwell confronted them. The woman allegedly told them that they weren't welcome in the neighborhood and even threatened to call the police. After she began to feel extremely uncomfortable at this behavior, Baze began to record the woman as she started to act violently, and had to be dragged away by her husband. As soon as the video went viral, Twitter tried to identify Maxwell and where she worked.

Carrie Maxwell was so concerned that a peaceful protest near her house would become violent that she called police and when they refused to come out because protestors have rights and Carrie Maxwell doesn't own the sidewalk or street, she ironically became the violent one

In the video, she is heard threatening to "f***ing kill" the child and her mother. The video also has sounds of the little girl sobbing as Maxwell was being forcibly dragged away by her husband. Clearly, the confrontation was a lot to take for the 8-year-old, and it was nothing short of a peaceful protest after all. Naturally, the response by social media users was outrageous. Several of them contacted the school and district to inform them about this incident. One user wrote: "@Wayside_Elem_ it has come to my attention that a staffer of yours, Carrie Maxwell, who happens to be a second-grade teacher harassed a young girl and threaten to kill her mother. Please let me know if this is someone you want representing your school or caring for children."

wouldn’t it be a damn shame if we all ruined carrie maxwell’s life. who is, might i add, a 2nd grade teacher @ wayside elementary in bakersfield, ca the principal of the school she works at is dr. dylan capilla her email is capillad@bcsd.com pic.twitter.com/TY5JvmcDKQ

Hello @Wayside_Elem_ would you like to address the matter of #CarrieMaxwell, or do you prefer we continue to bring this to the fore on the Twitterverse. #BallIsInYourCourt #FireCarrieMaxwell

After these comments began to surface online, Maxwell also gave a statement through her lawyer, according to KBAK-TV.  "I had seen news coverage of the protest turning into riots across the country and was aware that the protests near my home had turned to confrontations the day before." "When I heard protesters gathering near my home, loudly chanting profanities, I became overwhelmed with anxiety and fear." Though she went on to say that her actions were justified due to various factors that were not indicative of her character or values, she later added: "I want to offer my sincerest apology to anyone who was hurt by my behavior in that video."

Maxwell's lawyer, Kyle Humphrey, gave a statement on behalf of her saying: "My behavior was never intended in any way to diminish the important time in the life of our country. Like everyone else, I was horrified by the video of the murder of George Floyd. Every man, woman, and child deserves to be treated with dignity, compassion, and equality, regardless of the color of their skin, and every protester deserves to live a life free of fear."

Response from #KCSOS re: #CarrieMaxwell. Let’s see what action #BCSD will take.

I hope a civil lawsuit is coming from the baby’s family. pic.twitter.com/dEJGICuWPF

"I am a caretaker for my 19-year-old autistic son and my elderly mother who has COPD and is extremely vulnerable to health complications. I had seen news coverage pf the protest turning into riots across the country and was aware that the protests near my home had turned to confrontations the day before. When I heard protesters gathering near my home, loudly chanting profanities, I became overwhelmed with anxiety and fear." the statement adds.

“Me & my daughter were walking alone & this woman jumped out to attack us. Everyday has been peaceful so I finally agreed to take Kimberly during the day”

The death of George Floyd has truly set off the nationwide movement at a fever pitch. This incident is but one in several ugly ones that have surfaced from #BlackLivesMatter protests in which people have threatened or condoned violence against protestors. Meanwhile, Bakersfield City School District Superintendent Doc Ervin said that their district would be investigating this incident with the teacher further.  “We do not condone nor endorse the action and behavior captured on the video,” he said.

Yeah, not good enough. I would never want someone like this teaching my young children.

Her name is #CarrieMaxwell and she is a liar. Her nice "lawyer letter" claims she NEVER threatened the woman and her child. Really what the hell does this mean (screamed at a sobbing little girl and her mom): “I will f-ing kill you!" before her husband dragged her away. https://t.co/im6aSUuxm6