trending celebrity people lifestyle news animals
Albinos, Including Innocent Kids, Are Being Slaughtered, 'Hunted Down Like Animals' To Bring Fortune

Albinos, Including Innocent Kids, Are Being Slaughtered, 'Hunted Down Like Animals' To Bring Fortune

In several shocking incidents, Albinos in Tanzania are being targeted, killed and having their body parts stolen by witch doctors who are sponsored by the country's elites. 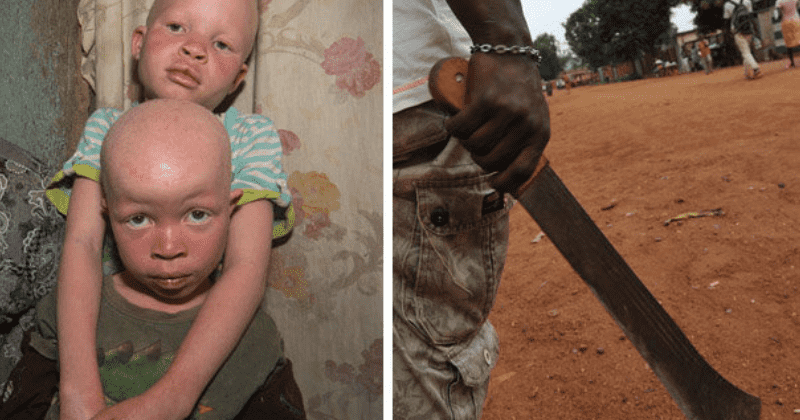 Africa is no stranger to terrifyingly grotesque events. The continent has recorded several instances through its long history of bizarre and crude human sacrifices and blood rituals. The culture of many tribes in Africa is surprisingly more in tune with nature than, say, the European, or Far-Eastern cultures. Though, more than half of these tribes practice destructive acts and rituals as they play with the dark forces of nature.

Currently, there is one such crisis that is causing havoc in Tanzania. Albinos are being hunted and murdered for their body parts, which are used in various black magic acts performed by the tenebrous witch doctors of that region. These albinos, are unfortunately referred to as "white ghosts" by many volatile and orthodox members of these tribal cults. Their sorcerers believe that parts of these Albinos' bodies bring good luck to them as they use their severed limbs and organs for their malign potions and rituals.

Albinos In Tanzania Are Being Hunted For Their Limbs
Families are trading their loved ones for money from some of the country’s most powerful people in Tanzania. They believed that albino body parts will bring a person wealth or luck, are willing to pay $3,000-$4,000 for a limb pic.twitter.com/OY6IU3G0rE

Some people who believe in which craft will pay lots of money for albino hands ... they are supposed to be full of magical power https://t.co/YwoYqmxHNq

In case some of you aren't fully aware, Albinism is an inherited genetic condition that reduces the amount of melanin pigment formed in the skin, hair and/or eyes. Most children with albinism are born to parents who have normal hair and eye color for their ethnic backgrounds. A common myth is that people with albinism have red eyes.

This is human trafficking, as simple as that. Reports say that people are willing to pay up to $3,000 for a limb of a dead Albino and up to $65,000 for an entire body. This vicious trade of human body parts is driven by the primitive and flawed belief that it would bring good luck and wealth. There are also confirmed stories of husbands turning on their wives for the money. The ones who are attacked often die from the injuries they sustain during the mutilation.

As of now, there are 72 confirmed reports of people with Albinism who have been brutally murdered in Tanzania. This statistic is recorded over the period of the last 5 years, and the sources say that this number is definitely far less than the actual one as many cases go unreported, and often involve children. The stigma that follows behind these abductions and murders leave a dark stain on Tanzania's culture.

A spokesperson for a charity called 'Standing Voice' said, "Seen as a curse from God, albinos are believed to bring bad luck to the households they are born in to. Many are killed at birth or rejected by their families. Judged by their skin color alone they are continually dehumanized and ostracised within their communities. This stigmatization has reached an unimaginable new level. This practice has been fuelled by witchcraft."

"Witchdoctors say the magic charms are more powerful if they contain body parts from people with albinism, which has led to a lucrative criminal trade in these body parts. In a society where poverty is rife, this horrific practice is becoming more widespread. To date, only five people have been convicted in Tanzania for these crimes despite 100 confirmed attacks."

Standing Voice is a charity that is dedicated toward putting an end to human rights violations against any and all marginalized groups in their country. And currently, it is Albinos who are being targetted and hunted down.

In #Tanzania having unique skin, such as an Albino, is normal. However, Tanzanian Albinos are being hunted for their limbs! Being told that by acquiring their limbs will bring the person good fortune and power. STOP HURTING OR KILLING ANOTHER HUMAN FOR SOME FALSE BELIEF!

In light of this resurgence of human trafficking involving Albinos in Tanzania, filmmaker Harry Freefold released a documentary called In the Shadow of the Sun which tells the story of two Albino men as they attempt to follow their dreams in the face of prejudice and fear.

Freefold has committed his life to fight for Albino rights and has shot the documentary over 6 years, depicting how Albinos live out their lives in constant fear. He is also one of the co-founders of Standing Voice, and recently said that "We are holding a press conference in Tanzania next week, but are expecting the worst."

Josephat Torner, one of the actors in the movie said, "people with the albinism are being hunted and killed for our body parts. It is because people want to become rich. We are still living in danger. It is because people, they have different ideas. Some people, they are thinking they should get our body parts and sell to different places. We can't be refugees in our own country just because of our color."