A Killer Whale Grieved For 17 Days Carrying Her Dead Calf. She Is Now Pregnant Again.

Tahlequah's not alone. There are other orcas who are also expecting and every successful birth is hugely important for the recovery of the killer whale's dwindling population. 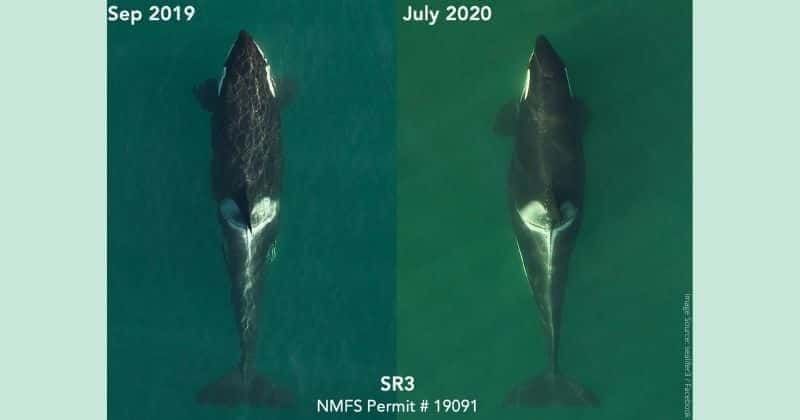 Tahlequah the orca went through a world of pain two years ago when she lost her newborn calf. The whole world mourned with her as she carried her dead newborn for more than two weeks, refusing to let her baby go. This took a toll on her health as experts helplessly watched her deal with this loss. Now, you will be happy to hear that Tahlequah, or as scientists refer to her—J35—is pregnant once again. This time, she's not alone. There are other orcas who are also expecting, reported CNN. Drone photos have revealed that Tahlequah is only one of several other killer whales who are pregnant.

A number of pregnant whales have been identified in all 3 Southern Resident pods. It's critical that they are given plenty of space during this important time. https://t.co/3Z281G79aK pic.twitter.com/mUo4KnWWZE

The Southern Resident killer whales are an endangered species. Pregnancy in these whales is not uncommon but unfortunately not many are successful. It so happens that pregnancies in the over three years have failed to produce viable offspring and Tahlequah calf was the first one to be born alive. This phenomenon is being referred to as the "dead baby boom." In 2018, the newborn whale was reportedly swimming with its mother and other members of the whale pod, according to the Center of Whale Research. But within a few hours, the calf had passed away and its mother was doing everything she could to keep it from sinking.

“At sunset, a group of 5-6 females gathered at the mouth of the cove in a close, tight-knit circle, staying at the surface in a harmonious circular motion for nearly 2 hours," a resident of San Juan Island near Eagle Cove stated. "As the light dimmed, I was able to watch them continue what seemed to be a ritual or ceremony. They stayed directly centered in the moonbeam, even as it moved. The lighting was too dim to see if the baby was still being kept afloat. It was both sad and special to witness this behavior. My heart goes out to J35 and her beautiful baby; bless its soul."

I Adopted J35. It's All I Know To Do To Help Her.
Orca Adoptions Support Education, Research & Public Outreach on Behalf of The Southern Resident Community of Killer Whales.#J35 #Tahlequah
To Adopt A Southern
Resident Killer Whalehttps://t.co/1yHkbZMbVbpic.twitter.com/IlZxFH7FB6

As of December 31, 2019, there are a total of 73 SRKW in total. This is a very small whale population and successful pregnancies are vital to keep the species of whale alive. Every successful birth is hugely important for the recovery of the whale's dwindling population. SR3's Dr. Holly Fearnbach and Dr. John Durban from Southall Environmental Associates (SEA) have been able to collect aerial images of the SRKW pods since early July. Through these drone images, the experts were able to notice obvious shape changes in some individuals, which revealed that there are a number of pregnant whales in all the pods.

Studies have been conducted at the University of Washington about the poor pregnancy rates in the whales. These studies have revealed that "these reproductive failures are linked to nutrition and access to their Chinook salmon prey, so we hope folks on the water can give the Southern Residents plenty of space to forage at this important time." According to a press release from SR3, Dr. Fearnbach and Dr. Durban are keeping a close eye on the condition of these whales with the help of the drones that will continue to take aerial pictures of the whale pods.

"The team will continue collecting data on the nutritional health of Southern Resident killer whales through the summer," the release stated, "particularly during their usual focused month-long effort in September, to help inform management decisions to aid in the recovery of the population." The whale population took a hit from 1965-75 as a result of whale captures for marine park exhibition. It is now vital to ensure the pregnant orca mothers are taken good care of to ensure a successful pregnancy. The whale pods have a tight bond and are seen often taking care of each other.